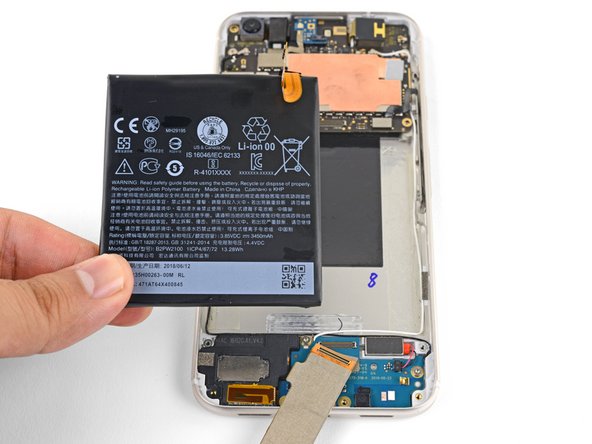 Follow this guide to open up the Pixel XL to remove and replace its battery. If your battery is swollen, take appropriate precautions.

Before disassembling your phone, discharge the battery below 25%. The battery can catch fire and/or explode if accidentally punctured, but the chances of that happening are much lower if discharged.

The Pixel XL’s unreinforced display panel is fragile and is attached to the frame with strong adhesive, making repairs difficult. There is a considerable chance of breaking the display, especially if it already has micro-fractures. Be sure to apply plenty of heat and be extremely careful during the prying stage.

I applied the heat with the iOpener multiple times around the edges (reheating it as needed to where it could barely handle it), and they refused to lift up with the suction cup.

Eventually the screen cracked as I was attempting to pry up an edge out of desperation. First attempt at fixing my own phone = fail whale :(

Sorry to hear about the unsuccessful repair, John!

Our Support team is here to assist in the event you need to find additional parts to complete your repairs, or if you decide you wish to return the kit that you ordered. Feel free to reach out to us via help.ifixit.com and we’ll do our best to assist you.

Is there an ideal temperature to head the adhesive to without destroying the screen?

@martinsing For most adhesives, 80-85° C is about right. You might have to maintain that temperature for a few minutes before it softens up.

How much deeper do I need to cut with the picks/etc top and bottom. The ~1.5mm of my picks isn’t deep enough to cut all the glue on the bottom (haven’t tried on the top yet); my sides were ‘easy’ to free in that my bad battery already lifed them free leaving the screen secured only top and bottom. I can probe deeper with a card or spudger, but how much farther should I be going.