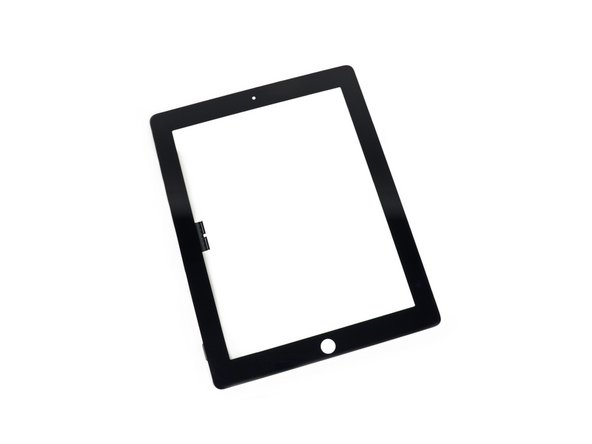 This guide and the iFixit toolkit was everything I needed to replace the glass on my iPad 3. They are right, it is diffficult, but doable with care.

Great Guide. Removing the display was less difficult than I thought after initially reading the guide. As others pointed out, DO tape the screen. This is even a good idea it's not yet cracked. Mine broke at one point and if it does, it's a mess. I had a screen protector on my display which caught all the little pieces.

Also while it might be possible to save the wifi antenna, i wasn't able to. I recommend buying the new wifi antenna together with the screen replacement right away to not get stuck waiting for parts should it break during screen removal.

I was going to add the button comment as a comment for the part but realized there's no place to do that. Now I can't edit the comment so here is some more:

A note on the bezel: You will notice dents on the bezel after the operation. Not sure if it's just my lack of skills but I doubt one can manage to jam the opener between bezel and glass without producing dents in the bezel.

Also a few remarks on the spare parts. The home button that comes included with the fully assembled replacement screen is rather flimsy. It more or less fully lacks the usual click when you press it. Hopefully it will last a while. I only noticed after I reassembled everything but using the original button might be much better. Also the replacement adhesive seems much less strong.

Success but it took me more like 3 hours, in part because I had a lot of broken glass. Do tape the glass and do wear safety glasses -- I've never done a repair where glass was flying so much. I did not break the Wi-Fi cable but I completely tore the digitizer cable in the lower left edge. Fortunately I had purchased the full assembly (IF116-018-3) that includes a new digitizer cable. Not necessarily a fun repair but who can argue with a $35 repair cost? The metal spudger (IF145-012-1) worked best for prying up the glass panel. Be sure to read the comments in step 30 to prevent damage to the ZIF connector.

The guide is excellent, and the parts provided first-rate. I do not know if the adhesive used on the digitizer plate is the same as in the original iPad. I found that the adhesive strips were not as strong as I would have liked, and although I was very careful to throughly clean the surfaces being attached , I found that the digitizer would still flex slightly when pressed.

I used a strong contact adhesive to secure the plate, and settles on Goop. I used it on the corners and also around the area of the home button, that needs to be seated very securely in order to make a good contact with the two pins it connects to. I followed the adhesive instructions carefully (thin bead on both surfaces, let it air dry for a couple min before contact), and then tightly secured the digitizer to the frame and bezel with scotch tape to keep things pressed down. The next morning the plate was on as tightly as when the iPad was new. I don’t know if this precludes future removal of the screen, however.