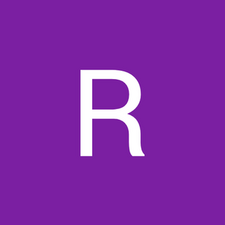 The display screen on my MacBook has become extremely hard to move over the past few days. I checked the 6 hinge screws attached to the lower case and the 4 screws attached to the display’s frame, and they seem to be set properly. I’m thinking the issue is with the lubrication of the friction hinge, as it requires an equal amount of massive pressure to move it to any position, (I don’t have any way to gauge this pressure, but it is a lot more than what’s normally needed).

The amount of pressure needed to move the screen is scary to say the least, it worries me that I might break the screen by just pushing a back a few degrees! It’s also is keeping the screen from staying closed. The torque holding the screen in an open position (~15 degrees) is great enough to keep the screen open even if it is laying upside down with the lower case weighing it down…

I replaced the display about a year ago and the battery about 4 months ago (with parts from ifixit). Both repairs went fine, and so far this is the only issue that has come up. I wouldn’t mind having to replace the hinges, the only problem is wire assembly going through each one. On the right hinge this wouldn’t be an issue, but the left has the %#*@ camera wire going through it, routing it all the way around to the top of the display assembly. It doesn’t look like the the camera wire can be threaded through the hinge without cutting one end of it. The other option is to remove the LCD to run a replacement camera up top.

So what would be most helpful is either, how can i restore the hinges to their original settings (most ideal option), or how can i replace both hinges without risking damage to the LCD. I haven’t ever used the camera, so sacrificing it wouldn’t be the end of the world, but whats the fun in that? (plus I’m not sure what kind of software consequences this will bring about) As nice as the replacement screen has been, I really don’t want to pay for a brand new one.

Any input would be greatly appreciated, thanks! 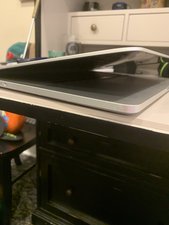 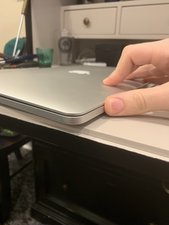 me applying pressure to keep it closed (it’s a lot) 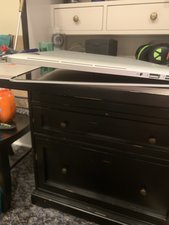 Have you tried dripping a bit of WD40 onto the hinge? Take the cap off the WD40 can and spray into it making a puddle. Now use a cotton swab wetting it then wiping the hinge. Often times this will fix a dry hinge. Just do't get things too wet as you don't want the WD40 to drip into the display.

Here’s the guide you’ll need follow to get the display off MacBook Pro 15" Retina Display Late 2013 Display Assembly Replacement then you can replace the cables. Review this guide MacBook Pro Retina Display Teardown to see how to disassemble the antenna so you can replace it as well as get behind it to release the iDP cable. Getting the iSight cable out is a bit more work as you need to lift the gasket around the edge of the screen and the frame. You’ll need a heat gun with a variable temp control as you don’t want to melt the rubber.

In any case you don’t want to damage the cables! The iSight cable has a thermal sensor in it which will mess-up your systems temperature monitoring (SMC).

Looks like I had the naming convention for the right and left hinges backwards in my OP, whoops. Alright, so I'll try the WD-40 on the hinges first, should I do anything to clean them beforehand? And in regards to the camera wire, I have some reservations about the display teardown guide. It looks like something i should avoid because the LCD ends up being destroyed. It also doesn't give any explanation into how it happened or ways to avoid it. Would it be possible to remove the terminal(s) from the lower case-side of the wires to thread them new hinges and reattach them after?

The trick here is not to spray into the system!

Using the method I've outlined will surgically place the WD40 into the hinge as its a penetrating oil it will seep into the hinge.

surprisingly silicone, graphite and lithium grease are all not good for your computer for different reasons. Silicone is a surfactant so it slowly spreads and is a bear to clean off. graphite is a dust or held in suspension with a solvent or oil so it will loose the carrier and drift away or just make a mess in a cloud of dust. Lithium is a heavy grease and just can't get into the hinge. Great for car's not so much for computers unless you disammble the parts which we can't here.

I use WD40 without any problems for over 40 years of computer repairs. I've gotten in systems in which have been destroyed by peoples efforts with lubes. Most of the time people just aim the spray can and let it rip! Giving is a good shower dripping wet when they bring it in.

Sounds good to me, I didn't know about the issues with the others, thanks! What about 3 in 1 Oil, I've seen reports of a few people putting this on instead of or after using WD-40. I guess the thought is after the volatiles evaporate off, the hinge goes back to feeling as "tight" as it did before using the WD-40.

Also I forgot to mention that if I over-tightened the hinge screws, the screen would pop open on its own in the past. I was trying to avoid this earlier, but now I think the poor lubrication has become the main culprit.

When i first installed the new display, I had issues getting the hinge to sit flush with the bottom case. I figured tightening the 6 screws would make them flush. When the display would pop open on it's own, I would slightly unscrew them until I found the sweet spot where it wouldn't automatically open and wouldn't wiggle. I'm worried this may have caused the an issue to form over time with the hinges.

Do Make sure the hinges aren't cockeyed!

Did you forget the spacers??

WD40 solved brilliantly, only problem is that I’ve perhaps added a bit too much of it and now I’ve run into the opposite issue, the display is flappy. As tightening the hinge, AFAIK, requires the display to be completely disconnected, I feel like I prefer to deal with a loose hinge than disassemble everything. Anyways, better than a stuck display that I was worried to break in half every time I closed it.

WD40 is a great idea. I've added abit of detail. I pourred WD40 inside a syringe 1 ml. Then put macbook with screen open on one side and dropped a little on metal part where the hinge is. The WD40 soaked immediately. Then I turned the computer on other side an repeated the procedure. After that I tried to close the lid. There was a click and then the lid smothely moved and closed perfectly. The hinges didn't go loose. The computer started opening and closing as brand new.

Сергей Глухов - So you didn't have to remove the back to expose the hinge? I took my mid-2015 to the genius bar today and they just told me my hinge was gunked up and they couldn't do anything?