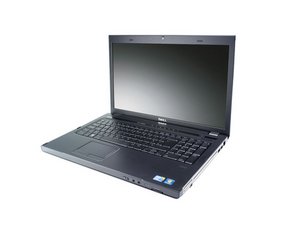 The Dell Vostro 3700 is a 17.3-inch business notebook marketed towards small business users.

I’m fairly sure this laptop is a gonner, but just in case anyone can sugest what’s wrong and a possible fix:

Normally when you power-on this model of Dell the fan starts and the 7 media LEDs between the keyboard and the screen flash in turn from left to right and back again. This is during the POST or even prior to it.

As you’ll see from this video, the LEDs flash from left to right but the laptop powers off just after they start flashing back from right to left. After a few seconds the fan starts again but this time only the first 2 or 3 LEDs flash before it turns off again. After a few more seconds the whole sequence repeats, alternating the left to right and starting back sequence and the first few LEDs only sequence.

This is not a blink code that I can find documented anywhere - the normal POST blink codes use the caps lock light, not the media LEDs.

I reasoned that maybe the thermal paste on the heatsink had gone hard and failed, and that the processor was instantly overheating and shutting down, so I took the heatsink off and renewed it but this seems to have had absolutely no effect. Even if I hadn’t applied the paste correctly I would have expected it to shut down even more quickly, or for it to run slightly longer before doing so.

Any ideas or suggestions anybody?

Does it do this with the charger connected and switched on?

Does it do this with the laptop on AC only - no battery inserted?

As you say the media lights are not part of the diagnostic" display, not according to the service manual anyway.

If you really want to get into it, here's a link to the motherboard schematics;-)

Thank you @jayeff - whether on battery or charger makes no difference but I might take just one more look at the motherboard for overheated components in the power circuitry - I was concentrating on the heat sink and fan when I had it out before. The schematics will be useful if I find anything there but a firmware listing might be more use in working out what the LEDs mean, if anything.