No Image on external display

No light if Caps Lock pressed 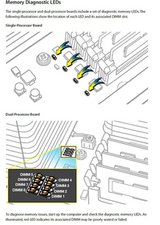 No Reseat all connectors and retest.

2. Connect AC power cord to the computer. Verify the 5V STBY LED illuminates when you press the DIAG button on the backplane board.

3. Verify the 5V STBY LED illuminates when you press the DIAG button on the backplane board.

4. Disconnect the front panel board. Momentarily jumper the pictured SYS_PWR solder pads on the backplane board. Verify the computer turns ON. 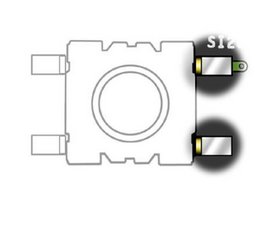 5. Reduce computer to minimal configuration. See Minimum Configuration Testing. Verify the 5V STBY LED illuminates when you press the DIAG button on the backplane board.

Yes Suspect a module that has been removed. Reinstall modules until symptom reappears. Replace affected module. Then go to step 6.

No Replace backplane board and retest.

6. Reconnect the processor board without processors. Press power button and verify computer turns ON. You can tell if the computer has started up by fans and LEDs. There is no other activity since there are no processors.

Yes Add processor A and retest. If computer power remains stable, the power issue is resolved.

The following procedure can help you troubleshoot a “No Power” or other startup related symptom. The method gradually builds up the system from a minimum configuration and verifies expected behaviors at each step. This approach helps determine which modules function together. The goal is to identify which module(s) cause a symptom to recur when they are added. This method may also help you discover a loose or faulty cable or connector. If you encounter unexpected behavior during a step, you should investigate the last module you re-installed. Backtrack to the previous step, remove the last installed module, and re-verify the expected behavior.

Note: Minimum configuration testing may not be practical for every repair. Refer to other troubleshooting sections in this manual for additional direction.

1. Remove the following items from the Mac Pro:

Disconnect all cables from the backplane board, except the power supply.

Note: When connecting the Mac Pro to AC power, verify that the LEDs for OVTMP CPUA and OVTMP CPUB briefly flash red (less than 0.5 sec). The LEDs are located under hard drive bay 1 on the backplane board. If they do not illuminate briefly, there is an issue with either the power supply or the backplane board. Generally speaking, power supplies can be affected by issues more than other modules. If you suspect a power supply has failed,verify it in another Mac Pro if available, before replacing any modules.

Note: The OVTMP CPUA and OVTMP CPUB LEDs on a properly functioning Mac Pro will also momentarily flash red immediately after the Mac Pro is disconnected from AC power. 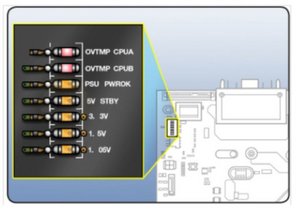 6. Momentarily jump the SYS_PWR solder pads to turn ON the Mac Pro. 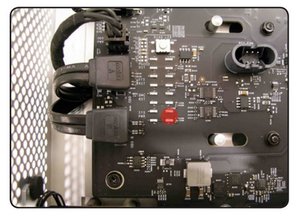 • One red-colored error LED illuminates on the processor board (next to the memory slots).

• The solder pads are at the same location where the power button would be.

7. Press and hold the DIAG button.

At this point, to make testing easier try powering on the computer using a known good front panel board, power button, and cable, instead of jumpering SYS_PWR solder pads.

9. Reconnect internal speaker. Reinstall a processor and heatsink in processor A connector, and one known good and compatible Apple memory DIMM in slot 1.

• The Mac Pro won’t start if you use processor B only on a dual-processor board. Use processor A connector.

• Verify no damaged pins on DIMM or processor connectors or mating connector of processor board and backplane board.

• Verify no damaged heatsink thermal sensor and fan connector pins or mating connector on the processor board. If there is damage, all Mac Pro fans will ramp to 100% when power ON.

• Verify no grime or foreign debris is causing contact issues on DIMM, processor connectors, and connectors on processor board and backplane board.

11. Power Mac Pro ON either by PWR_ON solder pads or front panel board.

• The red-colored error LED on the processor board next to the memory slots at processor A should flash once only as the Mac Pro powers on.

• Startup tone heard (if not, reset PRAM and retest)

• If using dual-processor board, both the LEDs next to the memory slots should flash once only.

• You can test both processors independently using processor A connector only.

• Verify no damaged SATA data or power pins on drive and mating connector on backplane board.

• Verify no grime or foreign debris is causing contact issues on SATA data or power pins on drive and mating connector on backplane board.

Shortly after boot start, verify that a red-colored LED is illuminated within the optical audio-out jack at the rear of the Mac Pro. If so, software drivers have been loaded.

• Verify no damaged PCIe pins on the video card and mating PCIe connector on backplane board.

• Verify no grime or foreign debris is causing contact issues on the video card and mating connector on backplane board.

Let us know what you find out.

Thank you so much for the info.

6. Momentarily jump the SYS_PWR solder pads to turn ON the Mac Pro.

did you ever get it to work? currently dealing with the same problem

Also consider this response where a defective memory riser could lead to DIAG_LED 2 and 9 being lit. https://apple.stackexchange.com/a/437563...