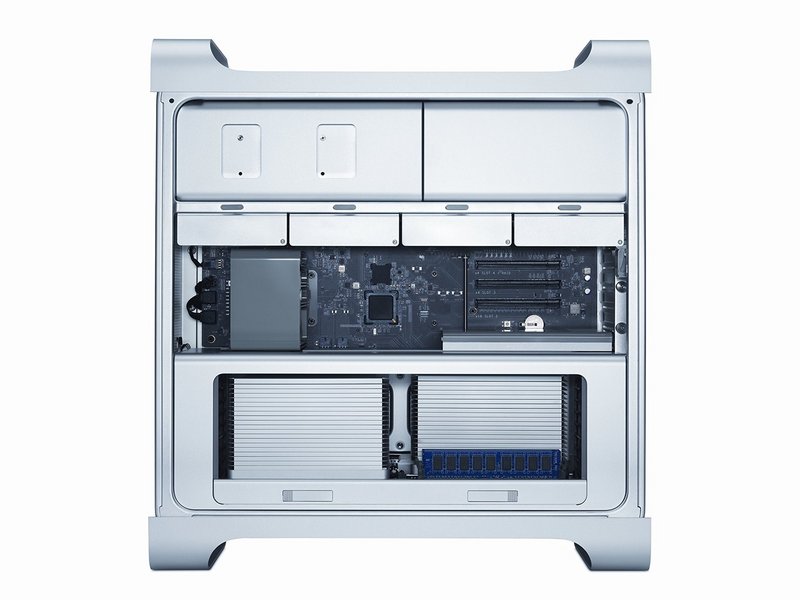 The Mac Pro is a professional desktop computer designed by Apple and first introduced in 2006 as an Intel-based version of the preceding Power Mac G5. The Mac Pro was updated in 2009 to revision 4,1 with new CPUs based on Intel’s Nehalem architecture and an internal redesign featuring a single removable tray for the processor(s) and memory. Further CPU updates in 2010 and 2012 (revision 5,1) used Intel’s Westmere architecture. Both revisions were sold with single or dual Intel Xeon processors granting up to 12 cores or consumer Intel Core i7 processors.

Many components in the Mac Pro can be easily upgraded if you’re interested in getting the most out of your machine. This awesome guide by Greg Gant details the compatibility of just about every upgrade you can achieve for Mac Pros from 2006-2012. The firmware on the 2009 Mac Pro 4,1 can also be updated so that it can use any of the CPUs from the Mac Pro 5,1.

Both the Mac Pro 4,1 and 5,1 support ECC memory, and some models of the 5,1 were shipped with 1333 MHz memory instead of the base 1066 MHz. Depending on the CPU(s) inside, the 4,1 and 5,1 Mac Pros can accept up to 64 GB or 128 GB of memory. Since the Mac Pro uses PCIe slots, you can update the GPU to a modern card as long as your operating system has the correct drivers.

The latest officially supported release of Mac OS that will run on the Mac Pro 4,1 is 10.14 Mojave (as long as you have a Metal-capable graphics card). With the same GPU requirement, you can use 10.15 Catalina on the Mac Pro 5,1. You can also use Linux or Windows 10 (guide) on the Mac Pro 4,1 and 5,1 if that’s more your style.

To identify your Mac Pro, find the serial number on the back panel just below the graphics card output. You can then use Apple’s serial number lookup webpage to identify the model. Both the Mac Pro 4,1 and 5,1 share the model number A1289.