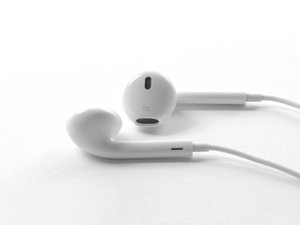 The big mesh in the front not working

As i said the big part in the front of earpiece,mesh or whatever you call it is not working,on both sides L and R.I just have the little mesh on the flat side working and its driving me crazy.The front part that goes into ear just have a very little muffled sound which is so annoying.

please help me there's no apple store in my country and you guys are my only hope.

This is a covered issue by Apple, please give me your country: http://www.apple.com/support/headphones/...

Sucking on it seems to work.

Thank you so much dear Mayer for your answer.I wish i could just simply go to the apple store and have my iphone 5's earpods changed,but i simply can not.And dear Brian,I hope you go and have yours changed and enjoy it on behalf of me too my friend!

And i'm from iran BTW.

Yeah you know it's not that easy to just go to other countries...And of course,if it was,trust me it would cost way more than a 29$ earpod!...Pooff even pakistan has apple store! :(

Nop. We don't Apple Store in PAKISTAN and it sucks. We have several importers but even then, no iPhone support.

It worked. Its quiet but it worked

I know this is a weird advice, but put the mesh that doesn't work in tour mouth and gently suck air with it.

This worked!!! I just bought earpods and the left one stopped worki g after 2 hours! Just suck the mesh until you can get air out of it

Holy crap this worked for me! Don't know how you figured this one out but thank you!

Thank you so much it worked and put me out of my misery!!! Thumbs up!!!

holy crap i wouldnt believe it until it worked! haha awesome trick

Jackson, hope you are handy when it comes to repairing really small parts.:-) You might want to take a look at the teardown of the headphones on here Apple EarPods Teardown The mesh really only covers the vent. Use a multimeter and check for continuity through your cable to the drivers (speakers) to make sure that you do not have a broken line somewhere. It might also help to post the model number of your EarPods.

P.S I thought it's from the remote,so i tried to open it up and see what's going on in there,so i opened the cover (from the side with buttons) and i saw a lot of electronic stuff in there and i freaked out! So i just tried to put the cover back there and guess what?! I can't! It won't stay put! I think i broke sth in there...And i think i must involve glue now :(

Jackson, for now, don't glue it. Wait till you can get it apart further to test it. Did you look at the guide for the teardown. It is not really that difficult :-) just very small.

The problem must be from the splitter where L and R wires split up or from beneath it,wires,the headphone jack or sth i don't know.

Put your mouth over the vents and suck until air flows through...just a thought. Believe it or not it worked for everyone else....including myself.

Does this work with AirPods as well? I’m having the same problem with mine.

Yes it does! I just did it on mine and it fixed the problem completely.

Uhm. Holy and $@$*. I tried every technique I could think of to clean these, reset these. Everything. I stood over them naked burning, sage and shaking feathers. Gobeman1’s answer to suck on the bugger worked. iPods are like brand-spaking-new. Cheers buddy.

I just carefully removed both meshes altogether - sounds great again. Yeah, eventually the stuff will cover the diaphragm itself, but for now it's amazing!

Another great trick which I only discovered tonight is to soak the difficult earbud in 90% concentrated rubbing alcohol for several minutes (the longer the better). First I tried gently brushing the mesh within the bud as I learned here. That proved only somewhat beneficial in terms of removing some of the surface wax. I then tested the bud but it was virtually unimproved. Next I tried taking a Q-Tip dabbed in 90% rubbing alcohol. That removed even more wax as noticed by the Q-Tip swab itself and by the waxy residue that accumulated around the inner edges of the bud but again, there was only a slight improvement. After that I tried dabbing the toothbrush head in 90% rubbing alcohol and vigorously scrubbing the bud. Again, that was only a minor improvement. The power of deductive reasoning told me that alcohol is clearly needed but the question as to the method needed to remove the ultra thin layer of wax that had accumulated deep within the mess itself remained. Since I have four pairs of Apple buds, two of which work perfectly, I had nothing to lose so I soaked the problem right ear bud in alcohol. The exact process I used is simply. First, get a VERY shallow saucer or other dish that will enable you to ONLY soak the tip of the bud where the mesh is soaking but only the mesh. In my case I lucked out in that my ex-wife bought tiny little square saucers with the initial of my last name etched on the inside bottom. The dish was PERFECT because it was not only shallow and square but was very small (about 3.5 - 4 inches square). Also, the dish was mostly flat however the edges of the dish were raised slightly and sculpted thereby creating a perfect place for the cord to rest which allowed me to perfectly position the bud into the alcohol (i.e. a 90 degree angle to the bottom of the dish). As a result, and the important thing to achieve, is that only the immediate mesh was soaking and not the entire earbud. After about 20 minutes of soak time I removed the bud from the dish then vigorously shook the earbud using a downward flicking motion similar to what you'd do if trying to force the mercury in a non-digital thermometer to the bottom. By using said motion it forces any remaining alcohol out and avoids contact with the functioning parts within the bud. It should be noted that it's best to use 90% concentration rubbing alcohol or higher because isopropyl alcohol evaporates almost instantly and, as such, should any alcohol run down into the functional components of the bud it will not cause any damage. But all that said, the ultimate solution that returned my earbuds to new condition was the blowing/sucking method.

4.3 years later and this (one or a combination of the above answers) is still the solution. Thanks!

Big Time My Man, Owe YOu One, had to make a small hole

I found a semi-permanent fix, sucking on it works temporarily if I’m out but it seems to be ear wax covering the mesh doing this. You take a Q-Tip and put rubbing alcohol on one end, use it to clean all the mesh spots, then dry off the mesh with the other side, repeat for the other earbud. I do this once a month or so and no longer have an issue. Thanks guys!

omg i sucked hard on it and it works again omg tysm i love you i thoubht my £80 airpods were broken ty!!!!

Yo just suck the front mesh till air comes out. Weird, but works…

Kiss your AirPod goodbye, it might work or not

It did for me tho

yall it seriously does work. this is insane lol. i didn’t think it would, esp since its an airpod now that isn’t working and not corded headphones. yet here we are, the Year of our Lord two thousand nineTEEN and apple still doesn’t have a solution to FREAKING EAR WAX

All I can say is this is disgusting and amazing. I cannot believe this actually worked for me! Lol!

Here in 2021 to say WTF, this actually worked. My left earpod (wired) would only emit sound from the side speaker and I had to turn the pod on it’s side and jam it into my ear to get sound/get it to stay.

Came across this thread, literally sucked on the front mesh side for like 10 seconds, and boom, working again. So wild.