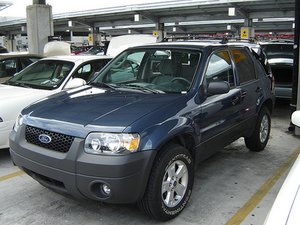 Rattle sound when car is turned on

I have an 01 Ford Escape, and recently whenever i turn the suv on after having it on for a few hours, i hear a rattling sound (kind of like something is shaking) which lasts for about 15 seconds. This sound is not there when the car is turned on an off without cooling. It might be coming from under the car, because it doesnt sound like its from the engine. any ideas? (car runs perfectly otherwise)

In reply to my post of a temporary solution for cars catalytic rattle and extremely poor performance, putting a scissor jack under the converter and jacking up the car a bit so it collapses the converter, changes the flow of air and loose particles creating a better flow of output to increas performance enough to get you home

Paul, what if this person's rattle is not from catalytic converter and they ruin there converter using your suggestion, costing them BIG$$$$ for nothing. I am not arguing the point that this could be a ((temporary fix)) for a bad clogged/loose baffle, but you would want to be positive the converter is bad and replace converter shortly afterwards. MY 2 cents, have a good day.

The quality of answers on ifixit is disappointing.

You probably have a loose heatshield. Check on your exhaust manifold and follow the exhaust pipes. You will probably see one or two sheet metal pieces that cover the exhaust pipes. See if any of those are loose. Check all exhaust clamps and make sure they are still tight and in the right places....

I have that exact problem its the exhaust manifold heat shield can i just take it off? They want over 100$ here for another one

turkeys answer doesnt help. the sound could be anything

I have a rattle, almost a buzzing sound, that comes from under my pick up truck sometimes. I hear it most often when I am pulling my boat when just pulling off from a stop. It drove me crazy! I finally found what was doing it. Its the catalytic converter! I had to replace a piece of my exhaust pipe and I told the guy that was working on it about the noise. He said," Lets see if it is the "cat" doing it". With the pipe off behind the catalytic converter you could look into the end of it. He shook the converter and sure enough it made the rattle sound. It turns out that some catalytic converters are made with material that shrinks a little after they have been used a few years and that lets the "guts" move around inside and rattle when the engine is under load like when I pull my boat or punch the gas to get out in traffic in a hurry. I took a hammer and knocked a small dent in the top, bottom and both sides of the catalytic converter's housing and put a stop to the racket! That beats the crap out of the alternatives, listening to it, paying several hundred bucks to replace it with one that will probably do the same thing or just taking it off and putting a piece of pipe in its place which happens to be illegal. The guy that was working on it said that he wasn't touching it but would make up the piece of pipe to replace it if I wanted to do it myself. I figured why bother as long as a few little dents would stop the aggravation.

I had broke down once thirty miles from home, the cat was rattling and i was losing power badly until i decided i am not going to make it home in this condition. I parked the car. took out my scissor jack, placed it under the cat and proceeded to jack the car up, which crushed the cat, displaced the air flow enough to get power back to drive it home and it no longer rattled so much

that solution makes no sense