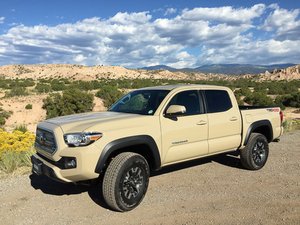 Keeping mice out of glove compartment

I had a disgusting situation that I’d like to prevent from happening again, without having to kill the mice that live around my house :(

I live in northern NY where it is cold for a very long time. My 2016 Tacoma (maybe a year old at the time) began to not have a new car smell but rather a horrid undefinable smell. I couldn’t figure it out, so would turn my dashboard fan and heat on in an attempt to ‘blow the smell out’ of the truck. For days, I could not figure this out. It was not improving. I thought it was my shoes! It’s been a couple years, and so I can honestly say I don’t remember how I figured it out…… There was a dead mouse and it’s nest was on top of the air filter under/inside the glovebox. I have heard from other people/mechanics since that Toyota’s are known for this. Is there a way to figure out how they are getting in and block it? Thank you! Anne

@adktomboy I’d try some fine mesh around the fresh air intake (commonly found under the cowling where your wipers sit). Any opening the size of your thumb will allow mice to enter so it’ll be a bit of a chore. 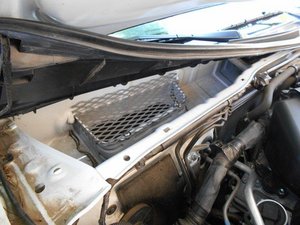 For more on this check on here

Awesome! Wonder how I get that thing off that's lifted up in the photo...

It "pops off" but may need some persuasion with a prying tool like a big screwdriver. There are plastic pieces that may snap but can easily be replaced with some mounting hardware available at Autozone etc,. You could even try places like Autozone to remove it since I found the sales staff in general to be pretty helpful.

Thanks so much, oldturkey! Is there a way to set ifixit replies here to go to email so I don't miss them?

@adktomboy yes, there is. If you get to your page (the one that pops open when you click on your Avatar) you should see an "Edit" link on the right hand side. Click on that. There should now be a site open that has tabs "Profile

Click on preferences. Now you can set your personal preferences regarding notifications etc. Let me know if that helped (I think I just confused myself :-)

Awesome! Thank you, I'll check that out. Applied for a job there. Would sooooo love to get it!!