I have an iMac Intel 21.5” EMC 2308 whose LCD backlight isn’t working. Thus the screen is black all the time.

The LCD itself however works. If I turn it on in a dark room I can see that everything is being displayed correctly.

The three diagnostics LEDs (not four, because this iMac doesn’t have an external graphics card) are all on, indicating that the iMac is running and communicating with the LCD.

Since an image is displayed on the LCD the problem is not the LCD data cable. The LCD temperature sensor + cable are also working, the fan is running with low RPM when the LCD is connected.

I disconnected the VSYNC cable from the backlight board and LCD and measured it with a multimeter, it is functional, even when it doesn’t look like it is. Also no connector/pins of the ribbon cable have been bent while plugging it in or out.

Next the backlight LED power cable. I didn’t measure it because I didn’t want to disconnect it from the LCD, but it looks functional and I doubt that at least three wires fail at exactly the same time (since it supplies three groups of LEDs with power).

So the issue is most likely either the backlight board or the LCD panel. That’s why I did a few measurements on the test pins: 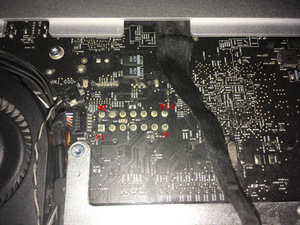 P1 is ground, that’s the pin I measured the following voltages against:

Next I measured the LED power supply pins on the backlight board: 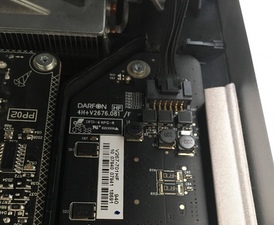 Afterwards I measured the ENABLE pin of the VSYNC ribbon cable connector: 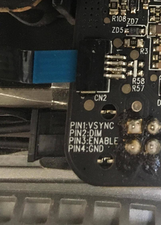 So I thought that this enable pin could be the problem, that’s why I used a 50kOhm resistor to pull it up to 3.3V, but it didn’t work, the LCD stayed black (could be because I failed to create a good connection between the resistor and the pin).

Then I measured the three pads marked in the following picture, as I suspected one of them may be responsible for the power supply of the IC APP003SN. 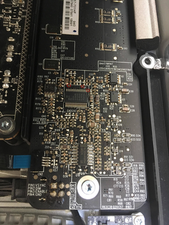 However, all of them had 0V on them, with an LCD connected.

So, my question now is what is more likely to cause this issue, the LCD panel or the backlight board? Or what can I do to determine where the issue resides?

Thanks in advance for your help.

EDIT: Oh, and I also did several PRAM resets.

EDIT2: Also the system was opened before. I was trying to replace the HDD with an SSD. After the replacement the iMac worked just fine when lying on the back without the front glass. So I switched it off, mounted the front glass and placed it on its foot. I turned it on, everything working fine, but then the display turned black and it didn't change since then. That was four months ago.

Four pictures of the iMacs components: 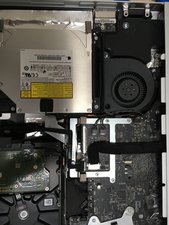 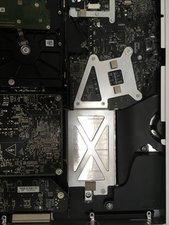 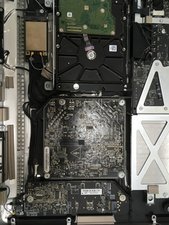 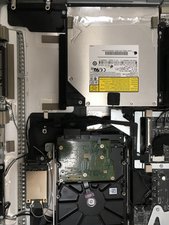 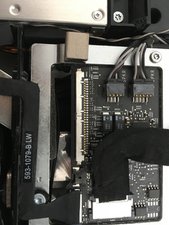 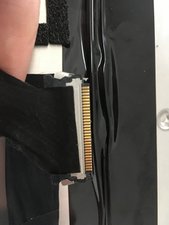 Other side + temperature sensor cable: 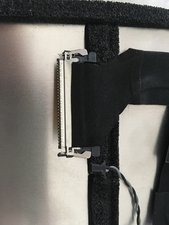 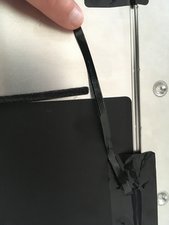 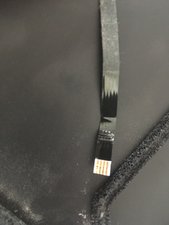 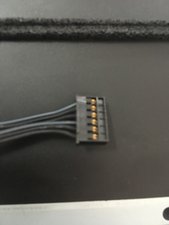 The logic board LCD connector cable is a bit broken (see the upper spot I marked in the following picture):

And also the VSYNC ribbon cable doesn’t look so good, but I did a continuity check and it was successful (it’s still possible that it has a loose connection that works in some positions).

Aside from those two cables everything looks functional to me.

To be clear here you connected an external monitor and it worked without any problems?

When you say you saw an image in a dark room are you saying the display has some light output on its own or are you shining a flashlight into the display?

I shined a flashlight on the display. The LCD has no light output on its own.

I didn‘t connect an external monitor because I don‘t have the right cable.

@raunha before replacing anything I would suggest that you check the voltages on your backlight circuitry first. Seems like @danj has the schematic for it and might possibly post a pictures of the circuit for you so you can check.

@raunha the display connector only has data/clock line and panel power on the connection. Since your panel displays video just has no backlight I doubt this is caused by the connector. This sounds more like an inverter board issue. Have you considered feeding an external 3.3V to the backlight Enable (also same voltage to the Dim line)?

LCD panel functional but backlight is missing or dim. Remove LCD panel and inspect and reseat the following cable connections:

-Vertical sync cable between upper end of LED backlight board and LCD panel.

-DC power cable between upper right of LED backlight board and power supply.

Thanks for your answer! I finally found the time to try it, I fed 3,3V to DIM and ENABLE directly on the display, connected GND to GND of the backlight board and GND of the voltage source. But it didn't change anything, the display stayed black. I also did another PRAM reset with 3,3V connected, no change.

So these results conclude that the display is defective, or are there still other possibilitites?

@raunha can you do one more thing? Can you connect the 3.3V to the board instead of directly on the display? Thanks

Why are you thanking me? I'm glad you're helping me! :D

Which OS are you running? Many newer OS’s such as Mojave on your unsupported iMac will disable the backlight. If that’s the case check out macforums.com unsupported Mojave thread for the fix. They have a link to the fix.

Sadly, this series has a combo graphics and PCH chip made by NVIDIA which had the tendency to fail. This is the same chip used in the MacBook & MacBook Pro’s of the same time period. You’ll need to replace the logic board to fix your problem iMac Intel 21.5" EMC 2308 Logic Board and here’s the guide iMac Intel 21.5" EMC 2308 Logic Board Replacement. Consider the costs & time to fix your system and how much life it still has. It maybe smarter to put the money towards a newer system (new or used).

Thanks for the answer, but there‘s one thing I don‘t quite understand: How can the gpu be defective when it still displays everything just fine and just the backlight isn‘t working?

Your voltage measure implies the backlight power is working. And as you also noted the gangs of LED's in the panel would not all die. I'm assuming here the system was not opened before so a possible damaged cable or connector are remote. And I think you've already ruled them out.

If you study the schematics you'll see the GPU has a enable line to turn on and off the backlight! I'm thinking that's your issue. Which is why I was aiming you to the logic board.

Thanks, but I also measured 3.3V at the backlight enable test pin on the logic board. Doesn't that mean the GPU is switching on the enable line?

Also I kinda forgot to note that, but the system was opened before, I was trying to replace the HDD with an SSD. After the replacement the iMac worked just fine when lying on the back without the front glass. So I switched it off, mounted the front glass and placed it on its foot. I turned it on, everything working fine, but then the display turned black and it didn't change since then. That was four months ago. Sorry that I forgot to add that in the question.

@danj - Sorry for the delay, I added some pictures to the question.

“Next the backlight LED power cable. I didn’t measure it because I didn’t want to disconnect it from the LCD, but it looks functional and I doubt that at least three wires fail at exactly the same time (since it supplies three groups of LEDs with power).”

I would measure the Voltage at the Backlight Vout pin.

you indicated you are getting 12Vin, but what voltage are you getting on Vout?

I am having a similar issue where I have 12Vin to backlight and 12Vout of backlight, so NO boost on the voltage.

I am trying to test the backlight board outside the iMac by supplying 12Vin,3.3V-EN,3.3-PWM with the result being 12Vout, with no BOOST to 36V and am also getting NO LCD lighting.

I know the LCD works cuz I used a China backlight and it works except no adjustment to brightness issue I am having.