Battery percentage suddenly drops from ~60% to 7%

A few weeks ago, I decided to replace my macbook’s battery - after 5ish years, the only thing about this laptop (the best laptop ever made) was the battery life drained quickly. I ordered a battery + kit from iFixit, and replaced the battery. I conditioned the battery, but every time it discharged it would jump from above 50% battery to 7% battery, then die shortly after (i.e. a very discontinuous discharge). I received a replacement battery for the replace from iFixit, and replaced again. However, I’m still having the same problem with the battery jumps . I figure it’s unlikely to be the battery, but am unsure what else could could be causing the issue. I’ve reset PRAM and SMC.

Download Coconut Battery on your Mac and add some screenshots to your question, thus we may be able to see some additional technical figures. However that seems to me another faulty battery, there seem to be quite a bit in the market with such percentage jumps issue and hibernation not working at all.

Added a screenshot of activity monitor and coconut battery

@tumblingpenguin As I feared, another faulty battery, capacity is not coherent with 3 charging cycles and behaviour confirms its bad performance. Just ask for a replacement.

I am on battery number 4 from 3 different vendors. Ebay and Amazon. This sucks

@Julian Mondragon - You maybe chasing your tail here! Many knockoff chargers damage the charging logic which in turn can damage the battery!

Firmware. Use configurator on another mac to repair/revive/refresh the firmware on the problem mac

Same problem here (drop from 70% to 7%) after following these instructions: https://help.ifixit.com/article/265-batt...

I also did the SMC reset. 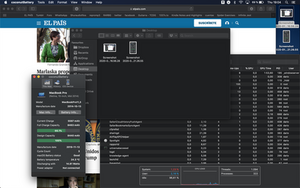 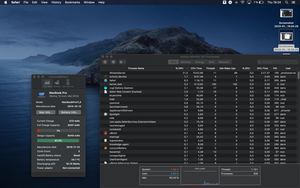 I did have a similar problem two years ago with another ifixit battery I bought for a MBP 2011 13”, I sent it back and bought a Newer Tech battery that also reports an inaccurate percentage. I am really frustrated with this after spending 80€ on a battery that is supposed to be of high quality.

I have received a replacement and this one seems to be working as expected. I am getting 6h (bright 70%) light use (web browsing + mail + bluetooth mouse and keyboard).

Where did you buy it plz?

It's most likely your power port. I tried two batteries before replacing mine (software would be unlikely to detect this). Now my second battery and my laptop work like a champ. The part is $12.00 But you have to pull the motherboard to get to it.

@Tom Freedom - Sorry If the MagSafe LED is lighting, its not the port. More likely the Knockoff charger damaged the charging logic on the logic board Lacking safety features, cheap MacBook chargers create big sparks.

I’m having a similar issue, but I don’t think it’s the battery. At least not the battery cells. I recently replaced my battery using an IFIXIT battery. I starting seeing the problem you’re describing, rapid drop in displayed battery charge, with my old battery. The Apple diagnostics indicated my old battery was ready for replacement, so I assumed the battery charge was actually dropping that quickly due to a failing battery. However, I’ve seen that happen with my new battery as well.

I had to move on to something else, but left the laptop on. The display sleep was set to 7 mins and the computer sleep to 15 mins. I would wake it up every 15 to 30 mins, navigate a bit and then let it sit. The displayed charged stayed at 7%. I actively used the laptop for ~ 2 hrs 30 mins and then the sleep/wake up cycling for another ~ 1 hr to 1 hr 30 mins. The battery completely discharged sometime between the 1 hr and 1 hr 30 mins mark. I didn’t witness it.

So, I think that’s fairly normal battery performance, ~ 3 hrs 30 mins to 4 hrs running off battery only power. Therefore, I think the battery cells are performing fine. That leaves the battery charge sensing circuitry. I’m not sure if that function is performed on the logic board or the small circuit board on the battery assembly. I’m planning on getting a new logic board for another problem, so I’ll see if it also fixes the battery charge state display. I think the graphics card that’s built onto the logic board is having issues, as I’ve been having a problem with the screen randomly blacking out, while the computer stays running.

I tried to get a logic board from IFIXIT and a couple of other sources, but they were all out of stock. When I get a new one, I’ll post the results. If the battery charge sensing function resides on the battery assembly circuit board, then a logic board swap won’t solve the problem.

If anyone out there knows where the charge sensing function is performed, that information would be helpful.

I have an update to my situation. I did finally replace the logic board in my MacBook Pro (Retina, Mid 2012). That did not help the battery state of charge display. I've concluded that I received a bad battery from iFixit. My battery status already shows "Service Recommended".

So, it sucks to say this on the iFixit forum but… I got a battery off Amazon and it seems to be working fine. Got 3 hrs of editing on it and it went just fine. No sudden drops etc. Havent tested internet browsing etc but all seems regular. Will report back in a bit with more testing. All in all I can say that it was not a motherboard issue, it wasn’t related to any repair mishaps or else. Simply a bad battery (well.. two fo them).

Now, I don’t think it is an iFixit issue and their customer service is stellar. I think that given the age of the machine, some of the batteries may be “dated”. Maybe the Late 2013 machine is just old and the batteries that are around now were meant to be purchased long ago… don’t know.

But again, the new battery works fine. I won’t post the link out of respect for ifixit but a quick search on amazon (i got mine from amazon italy) will show a range of batteries around 50 Euros. I got the one with the best reviews…

good luck everybody. BTW the Late 2013 MBP is still a solid machine, I have done all kinds of video editing and color etc and i works great. yes, slower than my new top specs MBP 2019 but hey…6 years old and still competing…

Could you recommend please the vendor of the amazon battery? Because I'm in the same boat and iFixit is not able to offer me another replacement (I already used 3 of their batteries in a month and a half, all of them with the same problem).

Amazing customer service, but sadly these batteries (as I understood it's a common problem during these months) are not so well functioning.

Did you have the right tools already, or did they come with the battery from Amazon?

I’m not convinced it’s a battery issue. I’m on my second new battery, reset SMC, calibrated on both and same thing - suddenly goes from like 70% down to 7%. Activity Monitor shows Google Helper using a lot of CPU resources so I’m wondering if it’s a software issue.

Don't know for sure but I can tell you that - after my second iFixit battery - a different replacement battery from NewerTech fixed the issue quickly for me.

Did anyone try if replacing the power port(AC/DC) works?

There is no AC/DC interconnection are you asking if the DC-In Board (MagSafe connection point) was tried?

yes, the power port. Someone claimed on the top comments that the power port change can fix all the battery problems. Anyone else prove it?

@Charles - While the DC-In board can be problematic,

I have yet to see a battery power level be effected "Battery percentage suddenly drops from ~60% to 7%" In all of the systems I've seen and what I've helped people here this is strictly a battery issue and/or the charging logic within the logic board is messing up.

Most of the time its clear from within CoconutBattery as in the OP's case the battery is defective!

I also have a similar problem. I bought a replacement battery for a MacBook Pro mid-2015 two years ago. The battery seemed to be working fine until a couple of months ago when I notice that when on battery, the charge goes from 100% to 90% and then drops to 7%. When I charge the battery up, the battery charges sequentially to 31% and then jumps to 100%.
The battery now has 293 cycles and the battery condition shows as normal.
I tried reseting SMC, disconnecting the battery, discharging and charging cycles, however with no avail.

Seems like a battery related issue rather than anything else.

This little thing is where you plug the charger.

It's quite difficult to test whether it's the battery or not. For that, you would need to crosscheck with another power charger...

My "new" battery is not a efficient as the original one and does'nt drop like this, still I haven't had any issues like this anymore...

So I would look at the DC power circuit board. It's not that expensive, not really difficult to change, but be aware of not tear the fan connector... I did it wrong and it's quite boring then to overcome it, since you would need to re-sold it.

I had a few 2012 Retinas in my little Mac refurbish business, and messed around with replacing batteries and logic boards in these models, when this issue occurred. I would appear that this issue 90% is caused by the little circuit board which comes with the batteries. While there are many brands, I suspect that most of them are done in one factory somewhere in Asia. There are some brand which give you a 1 years warranty , I now get the Amazon battery called EGOWAY, which has that warranty So far it has been working , and has resolved the issue in the A1425 Retina's in which I installed them.

But can you then change only the battery circuit board? Or does it require a complete new battery replacement?

@Robert Šajina - it’s not something I would do. First it’s a bit of work to take it off and even after transferring you need a special programmer to reset the BMC boards settings. You also run the risk of over-charging if you don’t use paired battery cells. A run away cell can set your system a blaze.