The iMac start's up and hangs at the progress bar 50% point before constantly rebooting.

I think I've tried everything:

I've systematically disconnected all hardware one at a time and tried restarts - no new results. I've also pulled the HDD and replaced with different HD pre-loaded with El Capitan (which boots up fine on its own on my other working iMac). Running AHT shows no problems either. Video card seems fine because the display is crisp with no artifacts at start up.

Thinking it must be the logic board, I've even replaced it with a used working board and same exact thing occurs (boot loop !&&* ) which leads me to think that it must be a kernel panic or something corrupt during start up process. I've also disconnected the internal HDD and booted from external HD with El Capitan preloaded and still no joy.

Trying to load / reinstall with the original install disk (Snow Leopard) either hangs during startup or gets me the grey screen of death screen (drops from top to bottom) forcing a shut down.

I realize I'm all over the place with this info but I'm nearer to thinking this iMac is doomed for parts. Any help will be appreciated.

Since you've near swapped out all the parts with no success, have you thought about the video card? I know you say you are not having any video specific issues, but it sounds like it can only boot the low level EFI functions. Although odd maybe see if you can boot an external boot camp partition.

've considered that it could be a bad video card but I've had bad video cards before and they seem to behave badly even during the low level EFI startup functions (screen randomly missing pixels etc). I have another working identical iMac that I guess I could swap it out with to see if that's the culprit (vid card) but was surely hoping that it wasn't the card...

Please explain what needs to be done for an external boot camp partition. I never use boot camp and am unfamiliar.

Boot Camp would have to be setup on a different Mac, then you just plug the drive into your iMac and hold down the Option Key to boot from it.

Thanks again. I will try this but just so I am clear: What is the purpose of trying to start up in boot camp? Is it to determine if it's a Mac-only problem?

Correct. It sounds like an EFI problem, or EFI firmware. Since you've tried multiple drives with different working installs of OS X. Maybe running Windows and having it boot via BIOS can at least get something working.

If you hold the Option key down after the startup chime can you get it to select which drive you want? If not the Boot Camp idea won't work.

See if there is someway to reload the Logic board firmware or the EFI boot loader.

Chris, Try starting up in Safe Mode by holding down the Shift key on start up. You seem to be hanging right about the time the video card instructions get loaded. Safe Mode will generally bypass this. If it works let me know and I can tell you the fix.

I've tried Safe Mode start up several times already with no different results except that the progress bar freezes and stays for an extra long time before I finally give up and release the Shift key. However, I will try this again later today and will report back on the results.

No results trying to start up with Shift key / Safe mode. Same boot loop hang up and restart.

"I hope this helped you out, if so let me know by pressing the helpful button. Check out some of my other posts if you need more tips and info."

Thanks but I've read and tried all those articles suggestions. Still getting same results. It seems that since I've replaced the Logic Board and getting same results as I was with the original board, that the problem resides in start up process which I cannot remedy to get past the boot loop.

During Verbose mode at start up, after FSCK executes, I get:

Chris, Were you able to resolve your issue? I'm having the exact same issue with my 2008 iMac (EMC 2211) with the same message when I turn on the verbose mode. Thanks

No I never was able to resolve the issue. I gave up on the iMac but haven't let it go yet. If you have any better luck, please post on here so I can try it.

Same issue on a mac mini, any luck out there yet?

FYI. I'm about to try swapping the graphics card out in a few days and will try to post my results on here.

Hope it works. I did try swapping graphics cards and that didn't change anything : ( Still a mystery as to why it reboots. My gut feeling is that it's a corrupted f/w.

No luck with swapping out graphics card. Mainly because this numb-nut discovered that I bought the wrong card. Seems I need the Nvidia 8800 card and this is the only card that will work.

What baffles me is that the graphics at startup (before boot loop starts at approx 55% during startup process) are perfect. This has always made me believe it isn't the graphics card.

I am having the same issue, except in verbose mode It Never gets past the

i am having the same issue: no recovery, no internet recovery, no safe boot. I can access terminal in verbose mode, thats all i can do, but I dont know exactly what to do.

Now the following comments only pertain to my mid-2011 21.5 inch i5 2.5ghz iMac which I purchased. It had an OEM hard drive failure that had occurred and I put a Samsung 850 pro SSD inside the iMac with a OWC thermal cable bypass to keep the fans from blaring at 6500 RPM. The previous owner was trying to update the old hard drive to 10.7.5 and the installation failed so he erased the hard drive try to reinstall 10.7.5 as a raw install not knowing that it need a 10.6.7. So I have been troubleshooting this iMac since and I will list the steps below.

Now I have done the FSCHK disk dev0s2 in single-user mode three pass. I have also done all verify disc and repair permissions. I have reinstalled and ran OS X update for OS X 10.6/10.6.6/10.6.7/10.6.8 and 10.7.5 and none of the OS X installers carry the correct boot.efi, smc, or startup cache file extensions. I have remove the hard drive internally and installed it externally and via FireWire (target-disk mode) on two other MacBooks (white OS X 10.6.8 installed natively)(2013 MB Pro i7) I own and was able to do a start up boot on the white MacBook due to the close proximity of the Operating systems.

I have done multiple NVRAM and SMC resets, to no availabity “nothing changes”, I also went into terminal to via target disk mode on the iMac SSD and changed commands to cause the iMac hard drive to only startup via verbose mode every time, but that didn’t work either, not without holding command-V.

I ended up ordering a gray OEM Apple iMac mid 2011 OS X 10.6.7 bootable installer disc off eBay for 10.00$. Awaiting the arrival of this disk (4-19) to wipe the hard drive with zero pass and reinstall the OS X via the SuperDrive. I believe the issue is in the Systems/library/Cache ktext startup files/folder and/or the SMC. There is no way to reinstall or hard force a EFI Update to version 1.9 (Apple support website) for the mid 2011 IMAC, so all the drivers and SMC extensions it originally came installed with are on a model/year specific OEM apple disk. I will post a link from the buyer are used on eBay. Thanks Apple, once I have this issue resolved I will come back and update to let you know whether or not this process or last resort worked.

So I will update this thread as soon as my iMacs status changes. 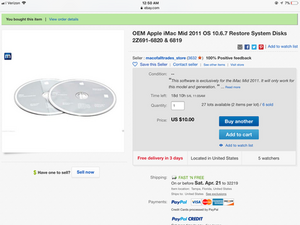 Any update on this?