The Xbox 360 is the second game console made by Microsoft, and was released November 22, 2005.

When a game is inserted, the Xbox still says "open tray." I have googled this and found it to be called "open tray error." Is there a way to fix this?

Mine did this last night. I found the following procedure on a youtube video somewhere. Can't find the link because YouTube is blocked here:

2: Turn on the machine by opening the disc tray.

3: Physically force the disc tray back in with force. Not so much that you snap the thing or knock it off its runners, but enough that the motors stop retracting the tray.

The tray should stop ajar for a few seconds before the machine composes itself and continues to retract the tray.

4: Reboot the Xbox and the drive should function normally.

I'm unsure exactly why this works, but my best tech head says that the controller for the drive gets into a bit of a tizzy and doesn't realize that the laser is incorrectly calibrated. Forcing the tray this way makes the drive perform some sort of self-check, in which it re-calibrates itself and works.

HA! That is for real, worked for me. Kind of hard to get it right, just have to make sure it stops pulling it in halfway.

dude thanks .....people it wrks if a pot head can do it u can to

Nice! Thanks!! I am now a hero for fixing my boys xbox

Thank you very much! Worked like a champ on my boys xbox

I don't understand it I can't get it to work...help

if your xbox is out of warranty you can try taking it apart opening the disc drive and and cleaning off the laser with a q-tip and some rubbing alcohol....this would also be a good time to blow out any dust that may be inside the disc drive or in the console itself

Dude. F'in awesome. Took me a few times to get it done but it actually worked....

This actually works! My hero <3

How do you get the the laser? I tried to take mine apart and I have to break the case giving how it is put together! I'll have to get inside the box to remove the cover but can't because of the cover! ??? Very frustrated with this...

its not working help plz

Tap xbox while it's reading

Lay xbox opposite way you have it (horizontal/vertical; this makes dust fall)

Use CleanDr x disc to clean dust(got mine via gamestop power up rewards coupon;a dusty xbox will have a extremely noisy AC adapter)

Replace lens (if you know it's broke- important signs are if your games are getting scratched or/and the console makes a clicking noise when powering on;WARNING: WILL VOID WARRANTY)

Remove any disks, turn it off, eject tray, force tray close but leave it open a tad, once it closes itself reboot xbox (had to do this once because I left tray open after unplugging it)

Open up xbox to readjust laser lens if it is scratching your games or none of these solutions work(WARNING:WILL VOID WARRENTY)

I've had the original xbox 360 ever since the FF 13 version came out. I clean it every 2 weeks and repair it when something stupid like this happens. I think I know more than microsoft.

This is very helpful thanks Cameron Conrady:)

Thanks so much for the info.. I fear I will need to replace the lense.. It's so loud the "scratching" sound on power up and my games are constantly getting new scratches...

I always have this problem with my XBOX 360 halo 3. Here is a sounds-like-abusive-suggestion but it works to those who bought it from other people.

1) Open the tray and push it closed with your finger.

2) Close the try without the disc.

3) Once it says Open Tray after step 2, place the disc In the tray. As soon as it says, “Reading”, Beat above the tray as hard as you can.

4) If it didn't work the first time, press the red button underneath the tray.

5) Repeat the steps above.

6) If that didn't do the trick, try cleaning the disc, buying a new one, or cleaning the laser with a soft, damp cloth with rubbing alcohol.

That ruins discs with the dreaded perfect circle. Even on the S/E. BAD ADVICE.

It sounds like you have the RROD special based on the drive problem. Change the belt so you don't ruin your games.

Thanks Grace Pony, this worked for me. Is it good to beat my xbox 360? probably not, but it worked and once i got it working I installed the game. I just took the 360 out of the closet after many years so I could play fable 2 (just played the first one on steam but 2 is only on 360)....so even though I don't advise beating up a console, thank you so much!

I tried all of the different fixes for this error that I found. There was one that finnally worked for me after hours of tinkering.

You have to take the xbox apart and remove the dvd-rom. Open this as well. On the side of the laser unit there are two tiny screw looking things. The one on the left adjusts the laser hight. I had to adjust it for about an hour befor getting the exact possition. I also scratched a game with the lazer by moveing it too high so be careful and don't use your favorite game.

Yup that is called the POT tweak, Xbox-scene has a great PDF.

Settings> system settings> Under one of those tabs is something to the effect of Auto disk read when tray is closed. Make sure it's set to "yes" and then try. Worked for me and I tried everything else. Nothing worked but this.

One way is open the disc tray then turn the console off holding the disc tray so it does not go into the Xbox. You then switch your Xbox off and wait ten seconds you then switch it back on. After it turns on put the disc in the tray and you can now play your game enjoy

WARNING THIS MAY NOT WORK FOR YOURS. IF ANYTHING GOES WRONG IT IS MOT MY FAULT.

Make sure the disk is not the problem. If there is scratches, there may be nothing wrong with the Xbox

Try another disc and see if the same thing happens

Try to open and shut until working (or 5 times max)

If your disc compartment is misaligned, you may need to lightly press down on the Xbox logo, or near the button to open it. If it won't open hit the top but not too hard

This was solved long ago, no need for you to post here

A previous entry had is almost right. There is a small belt that drives the loading and unloading of the disc. If this belt dries out a bit, it gets slippery and will not have enough friction to completely load the disk. This will result in the error you are seeing. DO NOT adjust anything on the laser without test equipment. The alignment of the laser is critical for proper operation and can not be adjusted properly without the correct equipment. You can change the belt however. The belt should cost around $5.

there is probably dust or dirt on your laser reader. i had the same problem it wont read the games, there is a disc for about $15 about that cleans it just put it in and do what it tells you. if it doesn't read that disc just hit that top of the xbox when it is reading it.

Don't waste your time trying to tweak the POT settings. Simply replace the laser with a new one. For approx. $15 and an hour of time (if you've never opened the console) you can have it back up and running.

The best suggestion is to find a local repair shop that specializes in game console repairs. They will have replaced the laser many times and will have it done in no time.

I just replaced my laser and all it does is spin up for about 3 seconds stops then starts again stops and does it again for about 3 or 4 times and I already have taken off the anti static solder ball and am out of any ideas. If anyone has any ideas I would highly appreciate it.

Cleaning the laser will generally do nothing as they pretty much never get dirty. Just order a replacement laser and swap that over. Should fix your problem so long as you get the right kind of laser and the replacement part is no longer faulty. It's saying "Open tray" because the laser isn't getting a read and thinks that there is no disk in the drive.

clean the disk with water than turn off your xbox with no disk in it than unplug the xbox click the disk tray button and than plug it back in and tun in on.Than wait about 10 sec and open disk trey put the game in and close it with a bit of force not much and enjoy you game!!!

It's got nothing to do with reseting the laser or whatever.... There are two switches on the tray mechanism. One for open and one for closed. The closed switch is not making. It's the one on the left if you looking at the tray. Due to wear from playing lots o games it needs to have some fine adjustment done to its position so that when the tray closes the gear mechanism will touch and close it. You will need to fully open the Xbox including the CD tray to get access to the switch. With the tray open you can see the switch on the top. I had a multimeter so could do the fine adjustment with a small screwdriver while measuring the switch state.... Good luck..... Rob

I've tried every fix you can find online even lens cleaning and setting lens in position etc. For me it's only the older COD games Mw2 and earlier that are open tray error. Cleared the cache today on storage and hmmm played MW2. Although then I tried COD4 and back to open tray. At least I got one working again. So weird. Try it and good luck

All i do is blow into the slot while the tray is open, and then close it while applying pressure to the top and knocking on the top.

I Have found a solution very easy at this :

Juste press A to start the game but keep it pressed until it launch. The “open disk tray” will not appear.

What I had to do was lay my Xbox down on it's side (I had it standing up) and then put the game in. While it said reading, I tapped on the side constantly until it said play game and it worked. I hope this helps!

I had this problem on a 360, turns out the optical drive laser cable was disconnected from the DVD board. Hence it never read anything and assumed the drive was empty. Easy fix. 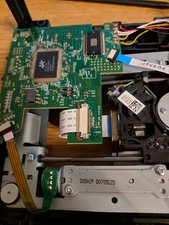 I was having the same problem. What I did to fix this was put the disc in the Xbox 360 photo down and waited till my TV said Open Tray. Then flipped it to the photo up and it started to read the disc.

I just flipped my xbox the other side (I had it sitting down) and it worked! good luck

it works as so as i flipped it , it worked