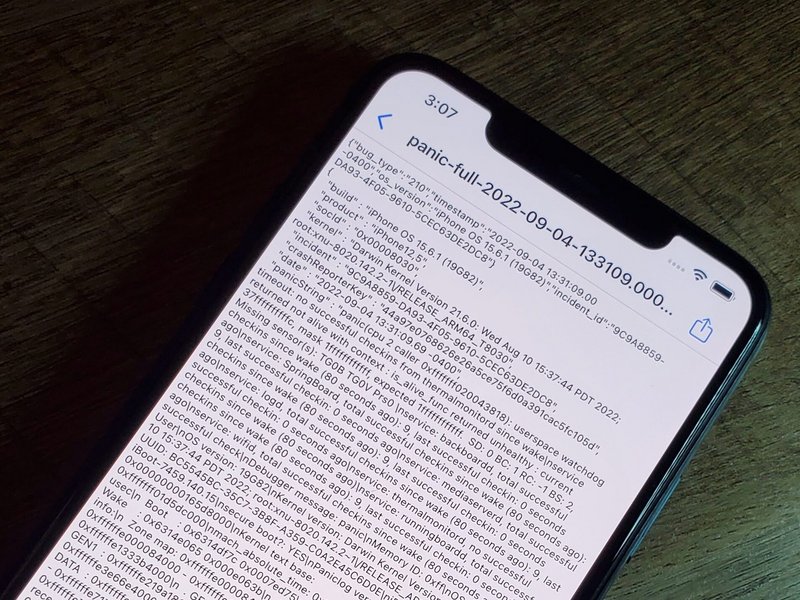 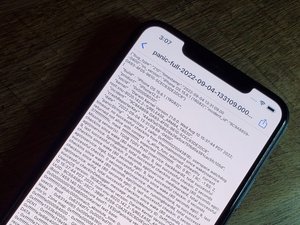 A hub for kernel panics or crash logs you may find in your iOS devices. Descriptions of their meanings and places to look for resolution.

If your iPhone is shutting down or rebooting unexpectedly, chances are there is documentation of this issue in your phone. Diving into your logs seems like a daunting task. But if you know what to look for, it can provide invaluable data about the nature of the problem.

This page is by no means a complete list. If your panic isn't listed, post in the answers forum! Someone else is bound to have experienced the same thing.

What Is a Panic?

In terms of macOS, iOS and other Unix based Operating Systems, a kernel panic is an error the operating system encounters that it cannot, or cannot readily recover from. In many ways, it is comparable to a Windows Blue Screen of Death. It manifests as an unexpected shutdown, or reboot.

If your phone is rebooting unexpectedly, there is a very good chance it's a kernel panic. You just didn't know that's what it's called.

iPhones store system logs in a menu seldom tread by the average user—deep in the caverns of the analytics settings.

There is an abundance of extraneous information in these logs. Skim through the first bit to find the panic string. This is the error that ultimately led to the crash. This error may also be listed without the panic string verbiage immediately following the CPU caller (this simply means which bit of the CPU reported the issue). There may even be helpful data beyond that in the first screen or so of text.

Use panic.full or iDevice Panic Log Analyzer as a quick way to get data on your crash. But without context this may just spit out a bunch of info you're not sure what to do with.

Included in its system processes, iOS contains a regular check of sensor input. If it does not hear from these sensors within three minutes, it reboots the phone. Jessa at iPad Rehab has done a rather extensive write up on this specific issue.

To get to cause, keep reading past the panic string to find the missing sensor.

Watchdog Timeout No Check In

The Watchdog Timeout process checks for overall functionality of the system. If the amount of time between check ins exceeds the maximum, the device reboots to attempt to correct this.

i2c or i²c, if you want to be technically correct, is an electronics based protocol used for communication between a net of chips. This includes a master and any number of minions it sends commands to.

I won't get too into the weeds on how this works, but in many cases, the master chip is the CPU. As you can imagine, if the CPU does not get information it needs, or commands it sends aren't received, bad stuff happens.

This particular panic will need lots of context. iPhones contain several different i2c "channels" and which components talk on which channel varies by model.

AOP panics are a whole subset of panic types. AOP is the Always On Processor, a segment of the CPU that runs functions that are always on. Always On functions can run even when the device is off. Recent updates to the Find My network allowing the device to continue transmitting its location in an off state, likely make use of this tech.

An NMI is a "Non-Maskable Interrupt." In plain terms it's information which cannot be ignored and can interrupt the transmission of other signals. It is usually intended to be used for some sort of error, or system resets.

This panic typically occurs during audio related functions, like turning up the volume to maximum.

ANS2 (Apple NAND Storage version 2) is Apple’s controller for, you guessed it, storage. NAND is a type of flash memory commonly used in modern smartphones and computers with soldered on storage.

Sometimes software developers have more fun coding in what occurs in times of error than other things because they are likely to be the only ones that see them. This error is pretty straight forward. Your CPU is not just hot—it's Hot Hot Hot.

The Secure Enclave Processor or SEP is the part of an iPhone subsystem which handles all protected, sensitive data for an iPhone. Things like encryption keys and fingerprint or facial identification data. The Read-only Memory or SEP ROM is an integral part of this system which verifies trust between systems.

The SMC, or System Management controller will be familiar to those who have ever done any sort of troubleshooting on a MacBook. iPhones also include an SMC, but rather than being its own chip, it is part of the CPU. These panics often make mention of the error BSC FAILURE.

This kernel of an Operating System is exactly what it sounds like—the core parts. If Instructions are undefined, often this is because the instructions are damaged or not functioning properly.

It's listed on the page already. You'll need to see what sensor array is mentioned in the panic and go from there. Sensor codes are listed in the section of the page discussing this panic. Replace the part with the referenced sensor first (or test with a known good) and if that doesn't help, it's likely to be a board issue.

AOP is always-on processor, the A7/M7 stuff that handles sensor data without waking the big cores in the SoC.

Watchdog Timeout No Check In

still an Issue on my iPhone 11 Pro Max on IOS 16.2 it just happened again and Apple has still not resolved this issue, this is beyond me.

Have you done a full reset of the phone? Every other instance I have seen of this issue required a wipe of the device.