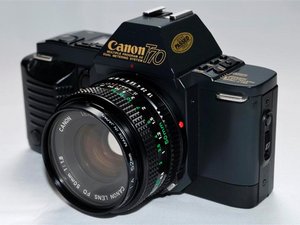 A 35mm FD-mount single-lens reflex camera introduced in April 1984 as the second in Canon's T series.

The Canon T70 is a 35mm FD-mount single-lens reflex camera introduced in April 1984 as the second camera in Canon’s T series. The T70 was designed to give the photographer more control over the camera’s operation. The T-series cameras feature a philosophy of simplicity in control and operation. When it was first introduced, the Canon T70 was considered technologically advanced compared to other SLR (single-lens reflex) cameras of the time.

The Canon T70 features powered film loading, advance, and rewind. It includes a shooting rate of 0.7 frames per second. To load the camera, users pull the film leader out to an orange mark and close the back. The camera automatically loads the leader onto the spool and advances to the first frame automatically. The camera is powered by two AA batteries that are placed in the grip. A built-in lithium battery (BR-1225 or CR-1220) is used to store user settings. Replacing the battery requires the partial dismantling of the camera’s body.

The T70 uses an LCD (liquid-crystal display) mounted on top of the right-hand side of the camera. Users can select parameters using two buttons above the display labeled ‘UP’ and ‘DOWN.’ Buttons located on the top left-hand of the camera are used to select the parameter to be modified.

Film Rewind: By motor; manual start. I measure 27 seconds for a 36-exposure roll.