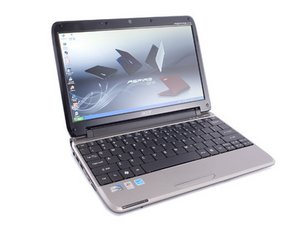 The battery won't get full

The battery stays at 65 percent no matter how long it is charged.

The Acer Aspire One, and all modern laptops use Lithium-Ion battery cells to store the energy needed to run the laptop when disconnected from mains, or wall power. Unlike older battery technologies, Lithium-Ion batteries are high-maintenance batteries, the prima donna of the battery world. The battery pack attached to your laptop has battery monitoring and maintaining circuitry inside the pack itself, making sure the battery pack does not get over-charged, under-charged, makes sure every cell in the pack is charge leveled, and even disconnects the pack if too much current is drawn which could result in a thermal runaway or explosion. This circuit could be interrupting the the charge around 60%.

Alternatively you could be experiencing battery wear. Each time you charge a Lithium-Ion battery it "burns" off a tiny fraction of its capacity. Over the years, or after many many charge cycles you could in fact be left with only 60% of your original battery capacity.

In either case the best and safest thing to do is to replace the pack.

I do NOT recommend opening or tampering with the pack in any way. The cells within contain lithium, an element that reacts violently with water vapor in the air. The pack if short-circuited can explode as the internal components of the cell fail catastrophically. Laptops do not use the safer lower capacity Lithium Polymer packs found in smaller mobile devices. Again, don't attempt to open the pack.

Check your power savings settings in windows and ensure that it's actually charging to full capacity. You can select how much you charge your battery...

Otherwise, without any further information (like how old the unit is, etc) you might just need to replace the battery.

i have to agree most of these types of batteries will develop a memory,when you dont fully run battery down an then charge back up alot the battery will soon remember an only hold 1/2 to 3/4 charge best bet is to replace battery thanks everyone this is a great site...