My mac pro has been running very hot and lately, it totally shut down by itself. I can see that it is running very hot and the fans had been on top speed all the time. I am wondering whether if i change the thermal paste to the CPU would help to reduce its heat and improve its performance. Attached is a screenshot of my mac pro temperature.

Update: I have managed to opened up and fan and gosh, the amount of dirt accumulated is ridiculous. Managed to cleaned up all the dirt and now my fan is barely activating. i shall monitor it for a while to see whether it starts to heat up again before i change the fan.

Install a good thermal monitoring app like TG Pro it will give you and us better information to understand what's happening with your systems thermals. Paste a snapshot of all of the sensors (you may need to take two after sliding the window down) and follow this to post it 在已经存在的问题里加入图片

@gyffom - Sounds like the replacing or cleaning of the fan fixed things!

I think its safe to say your problem is resolved!

Don't forget to score the answer and accept it - Thanks!

Hello Kelvin Wong! Before you try anything drastic, I would recommend that you just give your Mac Pro a good dusting. This is usually the problem in these types of machines and will usually drop your temperatures about ten degrees. While you are in your Mac Pro, I would also recommend replacing the thermal paste on at least on the CPU. The GPU could also be done as well if it is running hot. Chances are that the thermal paste in your machine is dried up. After sealing the Mac Pro back up and powering it on, I would recommend installing a free application called Macs Fan Control. It is one of the best fan control utilities for Macs and it works really well.

You can find the download link for Macs Fan Control here: https://crystalidea.com/macs-fan-control...

Check the CPU die or core temperatures as well as the temperature of other temperature probes inside of your Mac Pro. These are listed in the right panel of the application. 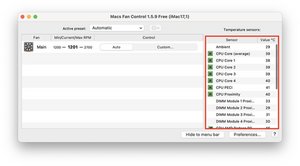 It is considered normal for a Mac to idle at 40-50 degrees Celsius depending on what type you have. I would say 50 degrees is too hot for a desktop Mac to idle at, so you can change the fan settings to make it idle cooler. You will need to do a little bit of experimentation with this, as I have never owned a “trashcan” style Mac in my life. What I can tell you is that the CPU core or die temperatures should never go over 80 degrees Celsius under load, especially in a desktop. I would recommend changing the fan curve for the exhaust fan in your Mac Pro. To do this, click on the custom control button for your Mac Pro’s exhaust fan. Set the control option to sensor-based value. Change the temperature sensor to either the CPU die or the CPU core average. I would recommend setting the temperature to start ramping up the fan to about 50-60 degrees Celsius depending on if you want your Mac Pro to idle cooler or quieter. Set the maximum temperature to about 80-90 degrees Celsius respectively.

Let me know if this resolves your issue. I would recommend trying this first before going and replacing the fan or heatsink. Chances are that if the fan is spinning at full speed most of the time, something is blocking its airflow or the heatsink’s heat transfer ability. Have a great rest of your week!

@bobsinger - I think he's set with a thermal monitoring app he already has TG Pro which I find is a better app than Macs Fan Control. One of its better features is the high water mark which is that white line and you have logging so you can trace an event back or monitor things over time pumping it out to a CVS file! Given this a good read I think you'll make the switch! TG Pro Tutorial

So far your thermals look within reason. But clearly the fan is running hard!

Its time to run the onboard diagnostics to be sure SMC is not seeing any errors. Restart your system and press the D key to enter. Did you get any errors? Ley us know.

If you don’t get any errors then your issue is strictly within the fan and you’ll need to get a new one Mac Pro Fan, Apple P/N 923-0491

i did a diagnostics and it says there is no issue. But my mac pro is running quite hot and i observed that when it goes up a certain temperature, my screen just freeze. i would need to quit some applications to allow it to cool back down. anyway i think the fan is really an issue as it is always running at top speed.

@gyffom - Monitor TG Pro over time it should help you understand what's getting hot and help you deduce the cause.

At this point the fan has failed and needs attention before I worry about running hot.

If you feel a outer shell it can be warm (not hot) as well as the air flow exiting. Thats normal!

Whats important is when TG Pro's thermal bars go into the Red (and stay for long periods) and when they do the fan's RPM should go up and cool your system back down.

It's when your systems CPU stays at 85℃ or higher I start to worry.

I realise the highest temperature is on the PCie Switch Diode which may goes up to 90 degrees Celcius some times. is this a concern for me? anyway the fan is on the highest speed even thou the CPU is at around 65degrees C.

@gyffom - Did you replace the fan yet?

Hi not yet. I am waiting for the part to arrive before i can make the replacement.

Normally it’s something I recommend as a quick TSing step to rule TIM out, but on these trashcans it’s not for the faint of heart and you need to know how to do it right, or you’ll create expen$ive damage :-(. The issue is Apple removed the metal bracket Intel installs to gain a little space back due to the needs of the trashcan cooling system. In most systems like this it isn’t an issue if you trash a CPU as they’re often cheap enough to replace (or it was done sensibly, as in the CPU socket is on the bottom and the CPU comes off with the heatsink, so it’s low risk), but Xeons are NOT CHEAP - you do not want to ruin one, or the socket! They’re amazing CPUs when you can score cheap Xeon hardware (I would say yes to the Xeon version of the same machine, without a question), but you do not want to damage the CPU or socket since the damage is far more expensive to correct then a standard Core i CPU.

Yes, it can and often does help, but please look into the option @danj mentioned first - you’re not going to put the system in as much risk that way.

@nick - The TG Pro output does not show a hot CPU issue, it shows a fan running hard with no reason from a thermal perspective.

So is the issue SMC encountering a deeper issue or is the fan just bad.?

It also doesn't make sense to refresh thermal paste until you have a clear diagnostic thats needed. TG Pro offers that but you need to build a history over time to track things. It's not the first thing I would do and most just don't needed it.

Depending on the composition of the TIM we often assume thats the issue. More often I find the heat sink coolant has leaked out in heat transfer tubes (needing a new heat sink). In this series there is no heat transfer involved (unlike a MacBook or iMac)! The CPU's sink mass is the same mass the fan is blowing across cooling it directly! Mac Pro Thermal Core

@danj Heh it depends on how much surgery I'm doing on the machine, especially with some age. If it's a few years old and the heatsink isn't too far away, I'd rather just address it while I'm there, especially if I have thermal paste ready to go.

On this yeah, I'd have some hesitation due to the cost of CPUs and damage.

i think i shall try changing the fan first to see whether it works before exploring other options.