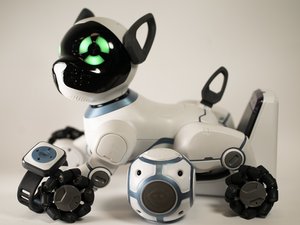 WowWee CHiP Robot Dog, an automated AI pet which you can control and play with. Released in early 2016. 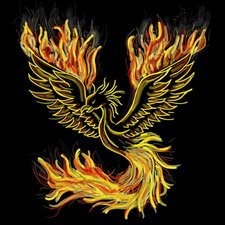 How would the multiple problems with this get fixed?

I have an older WowWee CHiP with a great many problems. First off, the IR sensors are miscalibrated, making it difficult or impossible for the robot to find anything properly. However, this is not a pressing problem, especially compared to the other issues it has. The rubber portion of the ears has been ripped off, revealing a rectangular plastic part underneath, labelled “L“ and “R“ for left and right, along with the inside of the ears. Even worse, the leg motors don’t function correctly and collapse under their own weight. They even flop to the point where they rotate as you rotate the robot dog. It cannot stand on its own and keeps collapsing in any attempt to stand. But, this isn’t the worst of it. The daylight sensor is malfunctioning and never seems to work at all, but an even more serious problem is that the eyes never light and no sounds ever play, similar to if you booted into a glitched mode by rapidly turning it on and off in the right way (likely from a power disruption). However, the head was stuck in place until it was freed recently, when the robot stopped working altogether (yesterday). Only one wheel (front right) also rotates under pressure, and two others (rear left and right) rotate when the robot is lifted, though one (front left) may not even rotate in this situation. Also, the SmartBand’s wristband is badly torn, and the SmartBed doesn’t seem to charge the CHiP (likely a contact issue). It can be direct-charged, though, but the poor charging position bent the cable slightly. I do not have the necessary tools to fix this issue, nor am I a specialist in WowWee CHiP repair, which would be what I would need to fix this great handful of problems. Do you have any suggestions that could be useful? Thanks!

you could try contacting wowwee about it, since it is a newer product

I did actually do that a year ago, before most of these problems existed, and I heard support had ended on the product.

Also, I found out that the CHiP still works, but it had a dead battery and I couldn't tell. It does still have minimal functions active when turned on. Only IR sensors and motors are active, but all motors are too weak to do anything, except wheel motors.