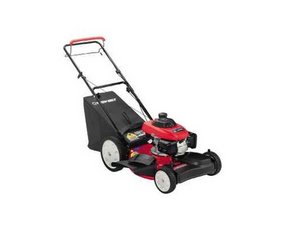 Repair information for the Pony 42, a Troy-Bilt brand riding lawnmower.

Pulley mechanism on shaft upside down

Hello. I just bought a used Troy Bilt Self-propelled push mower. It has a Briggs and Stratton 650 series (model # 7bsxs-1901vh) engine. A Belt is supposed to run from a pulley attached to the shaft where the blade is, to another pulley near the front wheel drive mechanism in order to propel. I went out and bought the proper belt, but the problem is that it looks like the pulley mechanism attached to the shaft was placed in there upside down. I say so because the belt doesn't line up properly when I attached it and it is definitely because of the pulley on the shaft being a bit lower than level. I took the bolt off in order to detach the plade and get to the pulley mechanism, but I don't see any way to remove the pulley mechanism in order to put it in right side up. It should be noted that the part also said "NH-Made in China" and read upside down. This is a very trick area to work right near the crankshaft and it looks like brute force may have been used to attach such a piece here. Any help is much appreciated! Thank you!

Take a piece of plywood 4 inches larger than the pulley and as thick as you can get into the pulley.. Cut a U shape into it that matches the inside diameter of the pulley. When you slide this into the pulley you should have about 2" of exposed wood most of the way around it. With 4 bolts, bolt a rectangular piece of that plywood to fill in the gap where the U is so the pulley is completely surrounded by wood. This will keep the wood from flexing too much. Attach a gear puller to the wood, not on the bolted side. You should be able to pull it off the shaft like this without hurting the pulley. I used this type of set up for years on GE washing machines 60's - mid 90's with the clutch attached to the motor shaft. I didn't describe it very well but I hope you get the idea.

Thanks for your help and time in the matter. This is essentially what I would have had in mind, except that I am certainly more on the novice side, so I don't have a gear puller. Any other way to force it off. It IS in a position that is slightly hard to maneuver too. I am guessing that hammering it off is out of the question. Otherwise, I would need a tool I could find or suggestions as to where I may find someone who may be able to help. I am trying to attach a picture of the item I'm trying to remove - It is the entire gold part, including the part that holds the belt as well as the gold part on the shaft with the "notch" in it. ...! What can I do? Thanks again!

If you live in the US you can barrow a gear puller from AutoZone. Most cities have one.

+ I totally agree, you can rent these or even purchase them for a reasonable price at places like Harbor Freight etc. It would help to get a picture of the pulley....

Max I looked at your picture, good picture by the way, it is a very similar situation as I mentioned about the GE washing machine motors. You will not get that off of there in one usable piece without a gear puller.

The only other thing I would add to that is that sometimes some heat will work in loosening the pulley. Just make sure that there is no oil seal in the cover to the left of your image...

I agree completely with oldturkey. It will fix the lawnmower in no time.