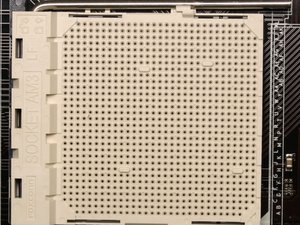 Released in February 2009, the AM3 socket is a CPU socket for AMD processors with 941 pin contacts.

Before I get into this, I noticed that I got zero comments or answers in 12 hours, which is unusual. Is there another forum where I should post this? Is there a reason I got zero attention? I really need help with this and I’m not exactly sure where to turn to. Thanks in advance for reading and/or responding!

So, it starts out with my prebuilt dell computer that I got when Etherium had jacked up the prices to basically the maximum.

Here are the stock specs for it:

I decided that I would do a major overhaul recently. This is what I got:

Upon getting the new parts, I gutted my old PC. I then realized that my mobo wouldn’t fit in the stupid dell proprietary case, so I decided to set it up on my desk with some foam underneath because I don’t have a test bench. I installed all of the new components and tried to boot it up.

I shorted the power pins, and the fans started spinning. The CPU and DRAM lights mounted to the mobo turned on, and after 5-10 seconds it shut off, restarted, and repeated. I reseated the cpu, applied more thermal compound. I'm not sure what exactly I did, but it eventually booted to windows

After 10-15 minutes of windows I got the Video_DXGKRNL_FATAL_ERROR blue screen. I rebooted and the same thing happened. After a while of this happening, I reinstalled my old graphics card and it didn't happen. I re downloaded and reinstalled the Nvidea drivers. I shut down, put in the RTX2060, booted up and everything was ok.

I decided to try and play Fallout: New Vegas. I had just downloaded it and have never played it before. I did the DirectX fix so that I could get in game, only to find that I was getting 5-10 fps. I restarted the game to no avail. I then looked in Task Manager, and I noticed that my GPU was not showing up in the performance tab. (yes, I did scroll all the way down).

I gathered that my drivers must have still been behaving oddly, so I looked up the issue that was making me crash before. On the web it said that a BIOS update might fix it. I decided to do that. I formatted a flash drive to FAT32, put the image file (blanking on the type), and did a flash update. All was successful, so I pressed enter to reboot. Then, the original problem of the computer turning on, and turning off 5-10 seconds later came back. I don’t know what to do at this point and I am frustrated beyond belief. I’m beginning to think that my mobo is a lemon or something because as far as I know that should not happen. I could use any advice I can get because I can’t think of anything else.

I don't see your original post so you may have posted at some other site.

I edited the post which brought it to the top again so I called it good. I forgot to take that out.

Black screen means generally two things, RAM or CPU issue, according to Asus specs which you can find it here, your MoBo is not compatible with Ryzen first-generation, also make sure that you haven’t installed the wrong BIOS on your MoBo, and the last thing to try is to use only one RAM instead of two or more, switch it between all the memory slots and don’t forget to clean the slots with a compressor air.

Remove your graphic card while testing and don’t use it until your system works fine.

Good catch, indeed the 1st gen Ryzen CPUs are not supported on the X570 chipset.

Right now, I can't get the computer to boot, even to BIOS. When I power it on, the CPU and DRAM lights on the motherboard turn on, then the fans spin for 5-10 seconds, and then it reboots itself. It does this infinitely as far as I can tell.

Before this happened, I don't think I was running the latest windows version but I'm not 100% sure on that

The aforementioned problem started happening after I did a flash update to the Bios to the latest version. It was running on version 1.0 before

I did not OC any parts beyond stock. I had everything on defaults in the BIOS. My default ram speed is 3000mhz.

I will use DDU once I can get my computer to boot to OS.

Have you tried clearing the CMOS? Usually they are done by shorting the CLR_CMOS jumper pins on the bottom right of the motherboard.

On page 26 of this manual there is a guide on how to clear CMOS if needed:

@benjamen50 Yup. I tried to clear the CMOS using the jumper pins and by shorting the battery terminals. Neither worked. I tried using 1 stick in all four slots too.