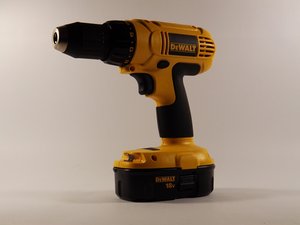 A standard cordless compact DeWalt 18V drill with a high performance motor that delivers 380 watts. Equipped with easy to hold design that allows you to work in difficult spaces.

Is it possible to rebuild the batteries economically?

I’ve had this DC970 for a while after the chuck failed and I had to break a busted bit out and oil the chuck to hold up. I’ve always jokingly said my oiled chuck will last longer then the 2010 batteries and I was right. One of my 2 batteries is at the point it initially had 16.54V with 3 bad cells and all of the remaining cells held a perfect 1.3V. I recently found out that the cutoff is 5.59V, so I investigated the state of the pack so I know what it’s current state is.

As it stands the battery went down from 16.54V (respectable amps left) to 13.43V (1A left) with one charge. I opened the pack to inspect the individual cells so I know the cause of death and I noticed 4 cells are now dead (formerly 3) and 2 of the cells dropped to 1.2V (out of 15). I didn’t see this as an issue because I knew it was dying and I’d eventually lose it. The problem is the DC970 starts to slow down (but doesn’t get crippled) at 13V, which is something I overlooked until I ran it to see what it’s going to run like from now on with that pack. This battery is effectively dead because of the massive voltage cut I took. This is a problem for most of my projects I use a drill for like drilling through thicker materials :(. I still have one more battery in descent shape (16.53V/1.08A from 18V/1.2Ah) but it’s dangerously close to death as it stands but has not been rebuilt nor considered for it (but it will probably need one sooner rather then later).

Is there a way I can get it rebuilt with NiMh or Lithium cells economically? Seeing as it’s a 8 year old drill with a chuck that has been oiled, I (understandably) want to keep my costs down. NiCd is horrible and I don’t want to use it again. I know Dewalt still sells XR OEM batteries but the issue is they are still NiCd. The 18V Lithium battery appears to be discontinued and I’d need a new charger which would negate the cost savings and put me into new drill territory anyway. It uses 4/3 Sub C cells from what I can tell, so that’s what I’m dealing with.

As long as you meet the requirements of the drill for power, it doesn’t care where the 18v DC comes from. Here is a video specifically talking about converting to Li-Ion using what appears to be an R/C battery pack. This way you can use a standard R/C charger for it.

That's not a bad way to do it. I'd need a new charger but I would need one either way if I wanted to do Lithium anyway. As I mentioned in another answer I have the DW9116 anyway and it's NOT a Lithium charger.

Sorry about the repost; I got new information from the source.

This seems like the most practical way to do a DIY battery rebuild when it gets bad enough I cannot use it and it deals with the BMS problem. I can get 4/3 Sub C NiMH cells if I wanted (with tabs) but I need to solder and that isn't good for the batteries; you need a spot welder unless you can cut the tabs and use that as a solder point but even then I'd be hesitant. The Sub C rebuild seems like a pro only rebuild. For a DIY rebuild, this looks like the best option.

If it isn't practical to save my NiCd packs, I can get a 20V Dewalt drill kit with batteries and the DCA1820. I can use the XR and standard batteries, but not the Premium packs (likely a motor limitation). I can keep both in service that way. Honestly good riddance to NiCd being the standard; these batteries are horrible.

For those who do not speak Spanish I've run this through Google Translate:

You can rebuild the batteries with other lithium technology, I will attach a YouTube video for you to see, the batteries you will use will be the 18650, the capacity of the same is to choose, against better batteries 18650 mounts more you will endure working the machine, apart from the batteries, you will have to buy a controller that manages the charge of the new batteries and the power delivered to the drill, but this is all very well explained in the video.

The comment reads: This procedure I have already done successfully and I give assurance that it works :)

The other problem is I have the stock DW9116 (not recalled) so I need a new charger for ~$100. That's if I remember the price right to convert it to Lithium.