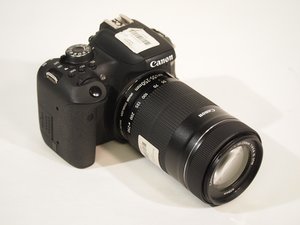 The Canon Rebel T6i is a popular, semi-professional grade Camera designed for any user. This guide is meant to aid in the repair of a few common problems that may occur during normal use.

Error 30 is an error you don't want to see. It means there's a problem with the shutter (electrical or mechanical). You can read more about it here.

I suspect your shutter is at the end of it's life. On these low end cameras, the shutter usually lasts ~50k shots. To make it worse, there's no way verify the actuation count on these cameras; you have to go blind and hope it doesn't happen on used cameras. Most do not meet the 50k shutter count, but some do. If the camera has been abused, it's going to die much earlier. The bad news is it's usually not something you can clear with a battery; it's usually a failed shutter. The cameras continuously operate the shutter when it fails; if this happens, it's usually severe.

It's best to get this repair done professionally since the entire camera needs to be taken apart, but it usually isn't worth it on the T series because the price of a used camera is usually close to the repair. Get it checked out professionally and brace for the worst. If it's about the same as a new camera, I'd just buy a body only Canon to replace it.

I had the constant error code. I tried everything. I decided to order a replacement shutter on eBay. Didnt need it after I opened the back case of the camera, I spotted a small ion battery attached to the main board...took it out. Put the main battery back in, cycled through the on and off switch, put the small battery back in place and BAM straight to the setup screen. I wouldn't recommend this if you don't have technical skills, cam is still under warranty. You will need a tiny screw driver to get those pita screws out. Cheers!