I have a MacBook pro 13" with retina display, kinda new. my screen stopped working suddenly and doesn't display anything. It boots up and displays perfectly through an HDMI on external screen. I am also able to adjust my screen brightness!

not sure which part is broken.

I'd appreciate any advice.

I have exactly the same problem on my Macbook Pro Early 2015 ed. Mine will start working perfectly when I connect it to external monitor either through HDMI or Thunderbolt but when disconnected it will either go blank or start flickering. Any help pls

Shine a flashlight into the Apple Logo in the display are you able to see the faint image of your desktop and its icons? If you can only your backlight logic needs to be looked at.

At this point, I think you'll need to pop the bottom cover off and inspect the display cable connection. Review the this IFIXIT guide: MacBook Pro （13英寸， 带有Retina显示屏， 2015早期） 显示组件更换. After disconnecting the battery jump down to Step11. Take some detailed pictures and post them here for us to see.

I did but can't see icon images.

What do you see?

By flashing a light into the apple logo in the display, I can't see anything just black screen. increasing the brightness works and the apple logo is on but there is nothing on the screen.

Not understanding what altering the brightness does here as if the screen is black and it stays black that doesn't tell us anything as far as the internal display.

I can't see anything on screen but altering the brightness makes the black screen lighter :-) just thought that might help to narrow down the root cause.

[EDIT: Update, had to reopen to reseat keyboard backlight connector, so again unplugged and replugged display connector - now when I shine a light through apple logo I can see the screen displayed, just no backlight.]

I am having a similar, but not exactly the same, problem: I get no backlighting (apple logo does not light up), and shining a light through it does not show anything.

One night I had an external hooked up via HDMI, watching a movie or something, turned my brightness all of the way down, and the next day my screen would not come on, but works perfectly with external. Brightness controls work, just nothing happens with the screen. A couple drops of rain may have gotten on it, not soaked just a couple/few drops - nothing else was affected (eg isight works).

I have opened the case and unplugged, inspected (seeing nothing of note) the cable, replugged, and closed the case. Have not tried using any electrical contact cleaner yet, but will do so later.

[Edit: Adding pic September 18, 2019… this pic isn’t very good, but it shows the connector in the monitor I mentioned in my later comment.]

Narrowed down the problem to the display inverter: 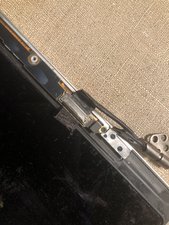 Does anyone know where to get these? 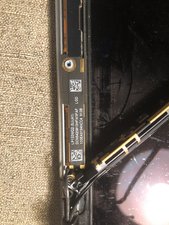 2) Also today, I removed the monitor and discovered that the connector looks like it might have burnt a little, same connector as pictured in pictured in Han Ming Saw's comment on Black Screen - External monitor works

Oh, and thank you for your reply, Dan. I don't get any notifications for replies on this site, nor do I see any place for that option, so I'll need to remember to come back to check (just saw that there was a comment when reading another, similar page).

I am no computer expert but it would seem that based on your previous answers, that there is something wrong with the LCD seeing as the backlight works but there is no display. The 2 solutions I could think of are:

1. Connect an external display and do a safe boot( Power + Shift) It probably won't help but it is best to try anyway.

2. If you are willing open it up and see if there is a loose connection or inspect for any damage to the LCD

Try them and report back

Abraham, you're on the right track! If you reread what shany wrote "It boots up and displays perfectly through an HDMI on external screen" we've gone past that.

Im having the exact problem but with my iMac, any ideas?

Already did the Step 11 on the guide. Disconnecting and reconnecting it but it does not work… Any extra help? My screen keep being black, although it works well with HDMI. 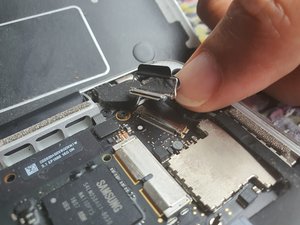 I am having the same proble. did yo get any resolution? Thanks, Ann

You need to turn on the computer and log in after you have unplugged it. Then turn it off, plug it back in, and turn it on again.