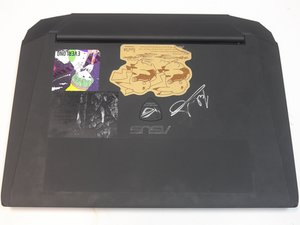 All my wifi networks have one bar?

So my issue I dont believe is my router. I feel like its my computer.

Two days ago my laptop power died, shutting off my laptop. So I turned it back on..

and I see all of my wifi networks have one bar. Im not sure why. I tried to reset my router

and modem, but I know its not that. My wifi works well on my phone.

Unless im right infront of my routher, my internet wont have a strong signal.

This is what I see http://vvcap.com/j5ZoDUF0kDQ

Why is this happening? I tried my laptop at work, and even 10 feet away from the router my connection

Can you connect to a 5GHz WiFi router at all, with a full signal showing?

If it shows as having the same signal strength as the 2.4GHz WiFi signal that you most probably are normally using, then perhaps the WiFi antennae connections in the laptop are loose or perhaps the WiFi card has a problem.

Here is a link to a video showing how to dis-assemble your laptop.

At 6:19 minutes into the video the antennae are shown being disconnected from the WiFi card.

Hopefully this is of some help

Didn’t work for me I have the same issue but on a pc and I’ve tried everything it’s not the drivers and I’ve taken the WiFi card out and placed it back it any help?

What is the make and model number of the pc?

Are you having problems with 5GHz or 2.4GHZ or both?

If only 5GHz try changing the WiFi channel in the router and check again.

Try installing this program and check the signal strength of your network and also to see if there are any other networks on the same channel that may be interfering due to having a strong signal.

Remember the signal strength is in negative dB so the higher the "number" the weaker the signal actually is. Because dB is a logarithmic measurement, every 3db is equivalent to half the strength (or double depending which direction the measurement is going) e.g. -90db is half as strong as -87dB, -93dB is 4x weaker than -87dB, -96dB is 8x weaker the -87dB etc

Usually on 2.4GHz most routers default to CH1, 6 or 11 so most everybody is on those channels as they don't know that they can be altered in the router (check the router's WiFi settings). Try altering the router channel to a "quieter" one (one with less or no appearances as shown by the program) to reduce the chances of channel interference.

Also physical obstructions and electrical interference between the router and the pc can reduce signal strength affecting performance , e.g. walls, air conditioners, refrigerators, fluorescent lights etc. (The electrical is if the appliances emit strong EMI either because of poor design or a fault)