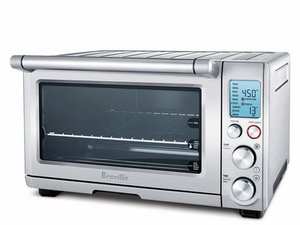 The Smart Oven® with Element IQ® is a trustworthy tool for the cook who wants a countertop oven that roasts succulent meat, broils, bake pizza, reheas leftovers and toasts evenly. Convection setting reduces cooking time by up to 30%. Model: BOV800XL

Pressing the start button on my Breville BOV800XL toaster oven also triggers the convection button, and sometimes the Fahrenheit/Centigrade button, instead of turning on. I have to press the button many times, carefully, before the cycle actually begins.

I suspect the button is flexing the PCB behind the control panel and display.

How do I get the cover off, and how could I fix this?

Have you been able to fix this? Mine just started doing the same thing

I added instructions on how to fix it. Hope it helps!

I had the same thought. So I too switched the ºF/ºC button for the on/off button. At first it appeared to help, but a few more tests and the problem was back. There must be another part on the circuit board that is out of tolerance...likely a capacitor. High heat can age capacitor more quickly.

2 SECOND Solution! I had this same problem. One day, I was struggling to push the button hard enough to make "contact" to start the toaster when I used the back of a butter knife to depress the button. Barely touching the button, the oven turned on. I couldn't believe it....so I tried it again and again. The metal contact from the knife must create enough of a static charge to easily turn the toaster on/off. I was so happy I could get a lot more life out of this toaster oven without taking in a part!

Here's where to get parts for it: http://www.ereplacementparts.com/brevill...

I had this same problem and fixed it today. Boy was it a pain in the butt!

The issue is with the push button on the "Control PCB". It appears that one of the legs in the switch no longer connects or shorts and it causes it to trigger the "Convection" button instead. The fix is to replace that switch or order a new circuit board. I ended up un-soldering the button used to switch from °F to °C and swapped that switch with the On/Off switch.

Here's how to get to that board (you'll need hands and arms similar to that of an 8-year-old child): 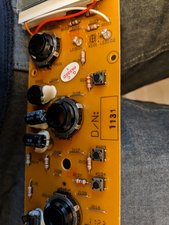 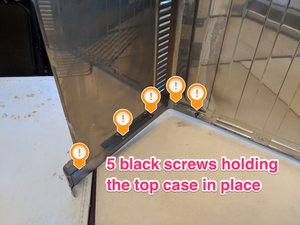 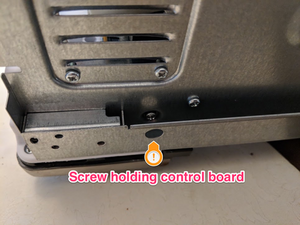 Great instructions! I've gotten it apart but am seriously wondering how in the world I am going to get those top screws backs in because they were such a bear to get out. Did you really get yours back together? Any hints on those 5 screws?

I did get them back in but it wasn't fun. I had to flex the outer case quite a bit just to fit my hand in there. Use a long screw driver and skinny hands!

And is your oven working correctly now? I took the circuit board to a shop since I’m not a solderer and they said the switch did not seem bad and started talking about switch leakage in a circuit and that I would not be changing anything by swapping switches. My eyes glazed over and I left - just wondering if I should try another shop or give up.

Hi Kathy, I have this problem too, but I haven't had the time to address it yet. The instructions Chris provided are phenomenal. I just wanted to let you know that I'm also "not a solderer", but it can be done by a novice. Youtube is loaded with "how-to" videos. It's a little scary at first, but you can do it too! You don't need a blow torch, but a small, pen-like tool that has a pointy tip that heats up like an iron. You just touch the hot tip on the silver solder material and it simply melts it away, so you can removed the part. Once the part is removed, you just add new solder by melting the solder material over the part you need to attach to the circuit board. Amazon has kits available with the solder material and the iron for less than $20. You just have to look up "solder kit". Good luck.

Maybe I don't fully understand the "black screw" problem. When I reassembled mine I reattached the control panel assembly to the housing with all the screws, put the housing in place, pulled the control panel side of the housing out slightly and I was able to easily reach in and connect the two connectors to the board. Seems to me it would have been just as easy to do this in reverse. If I needed to do this again I would do everything the same up to the "remove the back" step in Chris Helming’s instructions, then, from here, instead of fighting with the black screws, I would:

4) With the connectors disconnected, the housing + control panel can be easily removed from the rest of the toaster.

This step made things so much easier. Thanks for posting this! Was able to successfully perform the repair using Chris's instructions above along with this tip. First time de-soldering and soldering. Was sure it wasn't going to work but it did.

I was able to fix the start button issue using the great comments above. Thanks for posting them.

I replaced the Control PCB Assembly with a new assembly from eReplacementParts, using the link above (part number SP0010507, for $41.03). The part was backordered and took 2.5 months to arrive. The new screen is bright and the start/stop button works every time; feels like new. I did not solder.

I used both methods described above (by Chris and Phil). I used Chris’ method first. I was actually not able to fully remove the top case, only the left side of it (when looking from the back); the black screws were definitely a challenge.

Later, I read Phil’s method and decided to give it a try. For me, the top and right sides of the top case were held in very tightly, so it took a lot of wiggling and a fair bit of force, to finally pull them free. Remember to remove the screw on the bottom of the oven first. The top and right sides have a tongue-and-groove fit with the front of the oven. And, it also wasn’t the easiest thing in the world to put the tongue back in the groove when re-assembling. Note that with Phil’s method, you do not have to remove the back of the toaster oven.

Once the top case, with the control panel still attached to it, are free, and the two wires are disconnected, it’s easy to remove the black screws, as Phil says. So, having tried both methods, I would use Phil’s if I had to do it again.

One final thing. When I removed the white plastic cover from the control assembly, a spring fell out. I assumed that it fell out from the start/stop button and that’s where I put it back when re-assembling the control unit.

Correct, the spring is from beneath the start/stop button.

I ordered the replacement pcb and received the wrong one, don't know if the number above is wrong, or I was shipped the wrong board. Inspect the board you receive before starting the job. If you have a board with pot rotors, sticking up, it was the wrong board for me. It's possible there are two versions of the toaster over. Luckily, I had also ordered some of the digikey switches recommended, so I swapped the switch instead. My pcb had some kind of circular pots that were low and close to the board, and the knobs on the panel would fit into them.

Thanks to Chris and Phil for the great info on how to get at the circuit board!

I checked all four switches with a multi-meter, and all but the bottom ‘frozen’ button were flaky. When pressed the resistance should be steady and near zero, but the resistance readings on the upper three when pressed bounced around and were not near zero. This leads me to believe that the problem is environment (heat and moisture) rather than mechanical wear, as I never use the F/C button and rarely the convection button. This also means that swapping switches is not likely to lead to a long-term solution. Here is a link with a bunch of switches that will work (don’t get the ones where the picture shows very long legs) : Switches from DigiKey. This one, Best switch has gold plated contacts and is made for corrosive harsh environments (It is also vastly more expensive than the others, but still only $3 each)

Awesome! I was just wondering if mouser or digikey had this switch so I wouldn't have to do a switch swap. Thanks Tim

Thanks to original poster and posters suggesting better ways to get the oven apart! I just found this after fighting my pushbutton for a couple of months. On a lark I looked on DigiKey and I think I found the switch. I have ordered some and will report if they fit. The switch I ordered is ALCOSWITCH Switches 1825910-6. they are a whopping $0.10 each.

Changing the switches around fixed mime for awhile only: the uncontrolled pressing of the switch by kids flexes the board and does all kinds of havoc on the multiple connections.

Using a very thin tipped soldering iron, I remelted a lot of the contacts all over the board (using my best reading glasses) and even added a bit of lead in a couple of places that seemed thin. Flawless for a couple of months now. I had nothing to lose, saved me from buying a new board.

So after a month or so, the original problem returned and continues to happen intermittently. I only swapped the switches so am now considering trying to replace it and change the position of that spring while I’m at it. Was wondering if Dustin Rhoades had success with the switches he ordered? Or if anyone else can tell me what switch to buy?

I ordered 2 kinds of micro switches. I do have them but I haven't tried the repair yet. I have about 50 of each kind. I can mail you out a couple of each. Send me an email, my gmail is my username here.

Sorry but not sure I understand your email - is it dustinrhoades@gmail - one word?

How can I get 2 micro switches ? have same problem .chwaldner@ gmail.com

Switching an unused switch did not help. I was only able to resolve it by replacing the circuit board. As Duane reports as well. I suspect other components prematurely aged due to the oven heat on earlier models, without the white insulation Breville later surrounded the oven with.