Is there a way to fix bad WiFi without parts?

Since my primary phone has proven to be unreliable as it ages (LG G4 H815/AT&T), I have had to switch phones until I figure out if I can fix my other phone.

I have this Nexus 5 in my broken phone pile, and it was put in there because of WiFi issues. If the phone sits long enough, the WiFi turns itself off. The phone also needs a new MicroUSB assembly, which isn't a big deal. There's actually a battery or capacitor that is leaking on the board as well (which is soldered).

The big problem I have is with the WiFi issue. When the WiFi disconnects, the phone takes a few minutes to reconnect and some apps do not immediately connect to the internet over WiFi. What this means is I need to assume that the WiFi turned off and I need to reconnect. I also need to reload some apps as well, since they do not work correctly after the WiFi quits.

The leaking component is here: 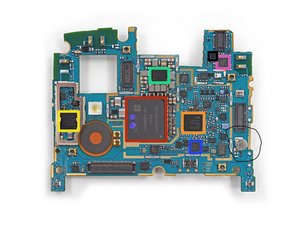 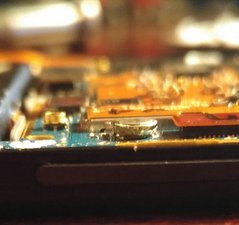 Is there a way I can repair this phone without a new motherboard? This phone isn't worth putting too much money into since I need to repair multiple failures on this phone.