No power on iMac

I have an iMac emc 2428 that is not powering up. The unit was left in sleep mode overnight and the next day it wouldn't power up. When the power button is pressed nothing happens, no noises or fan spin.

Apparently there are diagnostic LEDs that I am trying to locate. I removed the RAM and looked through the bottom vents and RAM slots but couldn't see any LEDs.

My guess is the power supply is dead, therefor no LED. Or the issue is I'm not looking in right spot. I have purchased suction cups but haven't opened the iMac until I know it's necessary.

Any help would be greatly appreciated!

This series is a bit different than the older models, the diagnostic LED's are located about mid point in the logic board and looking at the system standing are also backwards! The most right LED is #1. 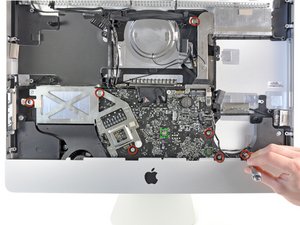 Diagnostic LED's marked in green and the order from this perspective is: 4-3-2-1 (zoom the image)

If first LED is not lit:

If second LED is not lit when power button is pressed:

In your case you've proved the issue is not the power button and the system is getting power, so the issue is more likely the logic board. 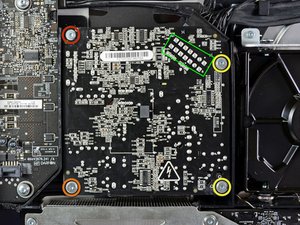 And here is the pins voltages you'll need to see: 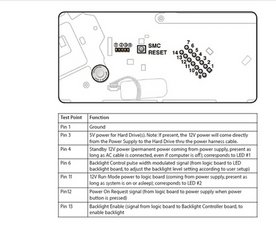 Oh awesome, thanks for the response! I opened it it up and only LED #1 is lit. Once I push then power button LED1 goes out and the unit remains dead. I have to unplug AC, wait 10 sec then plug back in to get LED back on. It then goes out again once power button is pushed. Any idea what this could mean? Thank you!

Not good ;-{ More likely your logic board is gone.

@danj Why do you think it's the logic board and not the power supply?

Ok, thanks for the help I appreciate it. This is my mothers iMac so I will break the news. I now need to salvage the data from her HDD. Any tips on that? I know if the computer was able to be booted you could boot into the firewire target disk mode.

EDIT: Any other testing to confirm if it's power supply or logic board? I'm willing to replace power supply, but only if I know it's going to fix it.

Yes, the power supply could also need replacing. But more often than not I've found the logic board was the more likely.

You'll need to measure the voltages of the connector or the power rails of the logic board to see whats present or not.

Sounds like it could also be the Power buttons continuity. Maybe the power button is bad and its shutting itself back off when the button is pressed?

The buttons rarely fail in the iMac's. What does happen is the connectors get pulled off or the wires cut during repair. As I stated in my remark in my update Adam proved the issue was not the button. From Adam's response: "Once I push then power button LED1 goes out and the unit remains dead" The iMac's use a soft button design so the mechanical button triggers the power supply logic to power up. As the button caused the Diag LED to go out that proved the mechanical button was working and the fact the LED went out also proved the switch logic is working.

Right on thanks for that. I haven't seen it very often but I have seen them stop working. Which is why I Asked about that.

Thanks for the suggestion, Daniel. I'll keep that in mind. Sounds like the button is working from that Dan suggested though.