What is the purpose of the dual video cards? Is there any reason why it shouldn't be on the nVidia full time? I'm not really sure when it uses and when it doesn't. Thanks in advance!

To get the most out of your laptop,

B. Go to control panel, then to battery, then select high performance power plan.

These things will improve your PC performance significantly. By the way, how did the DVD/HDD swap go?

Went well, I put in the SSD and it works great. I have not swapped out the DVD yet for the HD Caddy. I may not even do that. May just keep the original HD as a spare. I think my SSD is large enough I won't need the other.

The SSD was actually going to be called SHSSSFSCYPC, or in other words, Super High Speed Storage System For Super Charging Your Personal Computer, but they decided that was too long so they changed it to Solid State Drive. SHSSSFSCYPC has a nice ring to it, don't you think? My answer above about GPUs does not permanently use the Nvidia GPU, but I recommend not changing it so you have better battery life. However, I can tell you how to only use the Nvidia GPU if you like.

Yes I would, what would I need to do? Sorry about the slow response, am a police officer and working a ton this week so guys with families could go on vacation.

If you want to just use the Nvidia graphics, first make sure your graphics driver is installed, then:

Click View and next Add "Run with graphics processor" Option to Context Menu.

Right-click the application title and select Run with graphics processor.

However, an easier way to do it is to go into setup in the BIOS, select the graphics option, then to disable Intel graphics. Your computer may not have this option, so I didn't make this solution listed first.

Don't forget to install GeForce experience from the website.

By the way, did you get "The fuzz" badge yet?

Hello, your notebook has two video cards - one is integrated in CPU itself and second is discrete - NVIDIA GeForce GT 940M. Technology which is trying to find the best compromise between battery life and performance is called NVIDIA Optimus - http://www.geforce.com/hardware/technolo....

When less critical or less demanding applications are run, the discrete GPU is powered off and the Intel IGP handles both rendering and display calls to conserve power and provide the highest possible battery life. 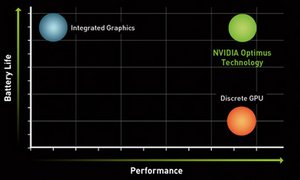 You can use NVIDIA Control Panel to set default preferred GPU - for best performance and to use discrete GPU by default change the combo box Preferred graphics processorto your GT 940M (see pic. below). 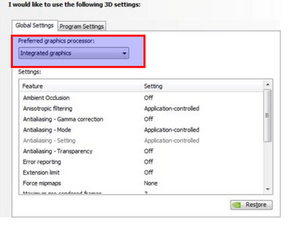 Yes good answer, but it doesn't tell how to set 940m as the main GPU. Neither does mine, but it will still help graphic performance.

@pccheese : Thank you for good point - I edited my answer and appended how to set GT 940M as default GPU.

Using two (or more) video cards in tandem—known as "SLI" for NVIDIA cards and "Crossfire" for AMD cards—can get you better performance, sometimes even for less money than you'd spend on a comparable single card solution.

Now what`s it really saying is that a single card produces more energy and then *heat* which states it works harder than switching jobs as 2 duel video cards, meaning more money wasted (in some case). Then again, if you have more of a range, you get better quality and performance. My idea of why its not on nViDIA full time is because think of it like this. nVidia constructs full on the sleek models and overall space, so Duel Cards do take more space, but also one card can have multiple programs going. In this case 2 cards have a certain limit depending on the model and overhang matter. Hope it helped!

For more Info of cons and pros, click here.

SLI and Crossfire are little bit different story - we can use this technology if we have two (or more) similar video cards and use parallel processing to increase the processing power available for graphics. All graphics cards are given an equal workload to render, but the final output of each card is sent to the master card. https://en.wikipedia.org/wiki/Scalable_L...

The question is related to NVIDIA Optimus technology which is focused to optimal performance/battery life ratio.

Thank you for the information!