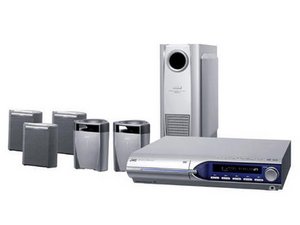 No sound out of subwoofer despite the green light

I recently had to unplug my sub due to a move and when I went to connect it back it isn't working. The green light is lit, but there isn't any sound coming from it. The floor speaker have sound output, but the sub doesn't. It also makes this loud cracking and popping noise if I touch the connection cable while on. If the noise is too loud the sub will automatically shut off and then turn back on, but still no sound. Could there be an issue with the connector plug? I did notice a pin or two were bent and I straightened them back. I've had this system since 2005 and it's never given me any issues until now. Thanks for any help you're able to offer.

@gigimarie79 yes it could be that something is shortening out. You connected it properly to your equipment? Post some images of your connector with your question so we can see what you see. Use this guide 在已经存在的问题里加入图片 for that

I found and article that said one of the defective parts that causes this is an open R2702 resistor. It's a 470 ohm resistor found in the subwoofer component. I opened up the subwoofer and found it back on the right hand side near the transformer. I used alligator jump wires to connect a good 470 ohm resistor across the existing resistor to test it, and IT WORKED!

Getting at the circuit board to replace the resistor is going to be a nasty project. My advice: If you don't actually have 470 ohm resistors lying around your place, you probably don't have enough electronic knowledge to repair this unit. Get a friend who is comfortable with electronics to do it for you. Their labor (a couple of beer) will be much cheaper than a repairman. The resistor costs about 2 cents (I buy in bulk - 470 is a commonly used value), so it's a shame to hand out about $100 to do the repair.

Testing the resistor is easy. To open the unit up, there are a bunch of screws on the bottom and a couple of screws on the side. Then the electronics slide out of the box. NOTE: You will have to disconnect the wires to the subwoofer speaker to slide out the electronics. Then you can reconnect the speaker to test it. BE CAREFUL! There is enough exposed high voltage to fry yourself on the board!