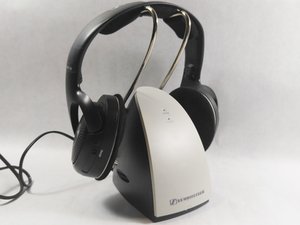 The Sennheiser RS 120 is an RF wireless headphone system with open, supra-aural headphones. This product can be identified through its model number, RS 120. The headset is the HDR 120, and the transmitter model number is TR 120. The Sennheiser RS 120 was released in 2004. They feature a transparent, well-balanced sound with excellent bass reproduction, making them an ideal choice for both hi-fi and TV use. The RS 120 offers freedom of movement, stylish design and optimum comfort at an affordable price.

Why do I lose connection after a few minutes?

I lose connection after a few minutes. I remove the plug from back of the tv, put the plug back in and it is fine for about 3/4 minutes.

This sounds like a known 'feature' for this model, for which there doesn't appear to be any proper fix.

Someone at Sennheiser decided to put in power-saving features. If the signal is below a certain level for a certain amount of time, the transmitter switches off. Unfortunately, what the software writer thought was a reasonable floor level for "there's nothing coming in, the source must be switched off" is other people's idea of "this is a quiet piece of music and/or dialogue". As far as I've been able to tell, there's no way to tweak those settings: you can't vary the detection level, and you can't tell it to wait a bit longer before cutting off. If anyone knows how, please share!

If you're only using the headphones on a computer, it's apparently possible to set up a loop of background noise, outside human hearing range but enough to keep the headphones awake. I'll refer you to JNL68's post on another thread (Why do they keep cutting out?), as his source evidently knows rather more than I do about how to set it up. But if you're using them on a TV, that's probably not a viable option anyway.

The closest thing to an 'official' answer I've seen is to crank the volume on your TV/PC/stereo/whatever as high as it'll go, then use the control on the headphones to dial back the volume to a reasonable level. They'll still cut out if there's actual silence for three minutes, but they should (in theory) stay on when there is something quiet happening. Remember to turn the volume back down if you want to unplug the headphones and use 'normal' speakers!