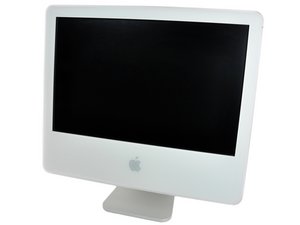 My iMac is stuck on the green screen. Why?

I have an iMac G5 2 Ghz and I tried to boot it up this morning. I heard a chime and the white apple loading screen shows up, but instead of booting into the OS, it just stays at the green screen that shows before it loads your background and applications. Has anybody had this problem before? The first time the apple pinwheel was showing and it wasnt moving, the second time it just showed the mouse pointer. I am thinking it may be a RAM issue but I want a second opinion before I lay down the mula. Thanks for looking!

P.S. We came downstairs in the morning and found the fans spinning fast and the computer wouldn't wake up from sleep, the sleep light wasn't on.

I don't have the installation disk. But I did reset the PRAM and NVRAM battery. Now I just see a mouse pointer. I just replaced the hard drive, so I don't think that is the problem, so I am going to try to change out the hard drive cables and see if that fixes the problem. Any other ideas?

Odds of it being the cable would be about 2%. Get a system disk. You can't do repairs with out tools.

Chris may be right about the capacitors but to make sure, try starting up from your system installation disk by inserting the disk and starting while holding down the "C" key. If it starts OK then the problem is with your hard drive or a corrupted system folder. If so, go to the second screen pull down menu, Utilities -> Disk Utility and repair the hard drive.

I would try reseting the PRAM and NVRAM, if that doesn't work, then your iMac may have the "Bad Capacitors" problem which is described in images appearing on screen and locking up Imac G5 link