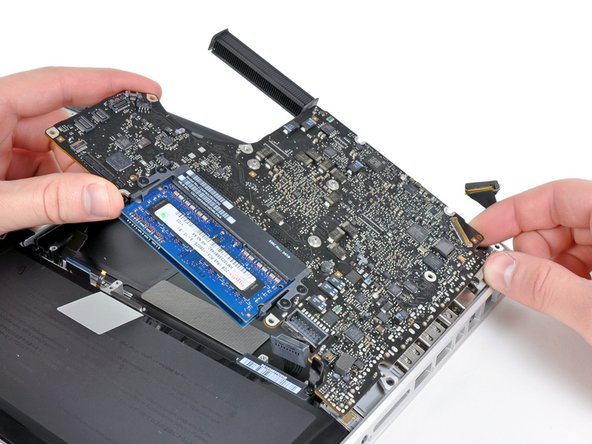 The problem... my GF spilled hot chocolate onto her macbook pro. Funny, they aren't waterproof after all. Okay, so the Apple store took $50 to tell me "Sorry, we don't sell logic boards for anything older than five years, because we want you to buy a new one, and we won't buy a board from anyone but Apple, because we're Apple." Note to self - NEVER buy another new thing from Apple, they're all about planned obsolescence and cyclic consumption. The job looked a little daunting, as the parts in this thing are tiny. I mean really small, but I truly hate the idea of throwing a laptop that cost $1100 refurbished into the trash and spending another $12-1900 for a replacement.

Enter ifixit.com. *yea* Bought a replacement logic and charging board and the tools I didn't have, which came sooner than expected, and followed the step-by-step instructions on the site. I took a little longer than the expected time, because I didn't want to trash anything else by hurrying. Got the new boards in with a little wiggling and a few colorful explitives, buttoned it up, and pressed "play."

Joy and happiness at the sound of the Apple boot chime.

Be careful! When they say "this part could pop off," they mean it. Really, go slow, read the instructions 2-3 times, look the part over closely, and read the instructions again, 'cause those parts are held on the mobo with little more than fairy dust and dreams. Guys, BE GENTLE with the parts. Good general advice I'm told, but especially true in this case. Use the spludger gently and make small movements. With that in mind, it's an entirely doable project with the skills most people actually have if they ever repaired anything electronic before (hard drive swap, battery replacement, RAM upgrade, etc), and at under $270 for both boards, a huge improvement over another piece of hardware in the landfill. Reuse-repurpose-recycle. Oh, and please stop drinking hot chocolate while watching Netflix on your laptop, Kay.