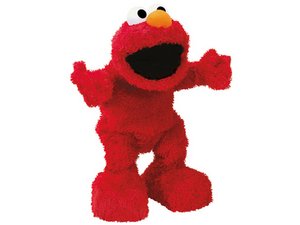 Tickle Me Elmo is a children's toy from Tyco-Preschool, based on the character Elmo from the children's television show Sesame Street. It was introduced in the United States in 1996.

Tickle Me Elmo is a plush toy based on the Sesame Street Muppet character Elmo and was released by Tyco Preschool in 1996. Tickle Me Elmo shakes, giggles, and says “Oh boy!” and “That tickles!” when his belly or foot is squeezed.

In 1995, Greg Hyman and Ron Dubren created a plush toy, “Tickles the Chimp,” that giggled when tickled. After pitching the toy to Tyco, they originally planned on designing a Tickle Me Tasmanian Devil toy. However, Tyco lost the right to create a Looney Tunes plush toy, but acquired the rights to create a Sesame Street toy. The Tickle Me Elmo toy was then developed.

Tickle Me Elmo gained mainstream popularity after Rosie O’Donnell featured the doll on her talk show in October 1996.

Tyco released additional Sesame Street plush characters in 1997, including Tickle Me Ernie, Tickle Me Big Bird, and Tickle Me Cookie Monster. In 1998, Tickle Me Zoe and Tickle Me Grover were released. Other Tickle Me Elmo variations include Chicken Dance Elmo and Let’s Pretend Elmo.