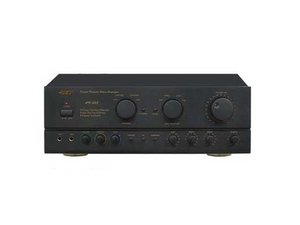 An audio amplifier or “amp” is an integral part of any home audio setup because it provides power for the speakers. An amplifier traditionally has inputs for audio from a variety of sources like a phone, computer, CD player, game console, or video player. The role of the amplifier is to take one of these audio sources and boost the amplitude of the signal so that the attached speakers receive enough power to make the walls shake.

Certain inputs like a record player produce a signal with extremely low power. In this case, the signal needs to be boosted before it reaches the amp using a preamplifier. Some amps—specifically called integrated amplifiers—include a built-in preamplifier.

There are a few other categories of amplifiers. A receiver is a special type of amplifier that has a built-in radio tuner so you can listen to your favorite stations. The name “receiver“ comes from the fact that the device receives a radio signal. Amplifiers that also handle video connections are referred to as AV amplifiers because “AV“ is short for "audio/video.”

The easiest steps to troubleshoot amplifier issues include checking that the inputs are in place and that the speaker cables are firmly connected to both the amplifier and speakers. Older amplifiers can have issues with bad capacitors that can be fixed with a bit of soldering as shown in this guide on Instructables. They may also have crackly volume knobs which can be fixed with some contact cleaner (see more information on Alex Audio).