The microwave oven, more commonly referred to as the microwave, is an electric oven that uses electromagnetic radiation in the microwave frequency range to heat food. Electromagnetic waves of small wavelengths were able to be produced with the development of the cavity magnetron. The General Electric Company (GE) Research Laboratories produced an early 6 kilo-watt version and gave it to the U.S. government in 1940. Raytheon and other companies were given contracts to mass-produce the cavity magnetron. While working at Raytheon as an engineer, Percy Spencer discovered the high power heating effect of a microwave beam, leading him to create the first microwave oven. His invention was aided by the development of radar technology during the war. Then, GE Appliances was credited with creating the first over-the-range microwave in 1978, the SpaceMaker. Most of the GE microwaves have a similar design and aesthetic but are available at a variety of price ranges.

The GE Microwave Oven model JVM1650BB 007 is a 1.6 cubic foot capacity, 1000 Watt microwave oven with outside venting. The microwave oven includes sensor cooking controls and a turntable on/off option. It also includes an oven rack with two positions that increase cooking flexibility and space. The device is designed to automatically adjust time and power for optimal results. Defrosting times and power levels are programmed automatically or manually for best results. A two-speed 300-cubic foot per minute venting system removes smoke, steam, and odors.

The GE Microwave Oven model JVM1650BB 007 is generally black in color and includes the GE logo in its lower left-hand corner, which includes the letters “GE” in a lowercase cursive font. The microwave oven includes an array of buttons on its right-hand side with a digital clock that also acts as a timer in the upper right-hand corner of the device. 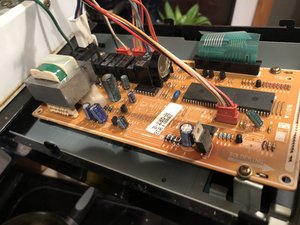