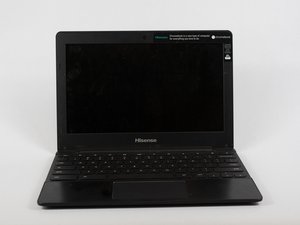 The Hisense Chromebook C11 is a 16GB Chromebook with 2GB of RAM, produced by Hisense.

Why does my display not work via HDMI?

My grandma gave this this computer a while ago because she broke the screen and gave it to me saying that if i could fix it, i can have it.

I’m not really interested in repairing the broken screen but I am interested in accessing the files. The only way i can think of doing this at the moment is to plug it into my tv via HDMI, however when I do, I receive no signal.

The HDMI port seems functional on the computer and is functional on my roku tv as i usually use it for my playstation, the HDMI cable is also working.

The computer does charge however it seems like the power button doesn’t work and i’ve noticed a rhythmic beeping noise which is likely the battery or some other component but i find it a bit odd. The display also randomly flickers black on the computer but that is presumably because the screen already being broken.

I already posted this on Reddit here where you can slightly hear the beeping noise i referred to earlier.

Just confirming, the laptop you have is the Hisense Chromebook C11, yes?

yes i have a video in the post @andrewsawesome

Hello Solac3. If your HDMI port isn't working, you should be able to replace it via the disassembly of your laptop. simply unscrew the back panel and you should see the ports inside. remove the HDMI port and replace it! good luck!

No the HDMI port seems to be just fine but i can’t really test it since i don’t have access to the computer. The HDMI port on my tv is working as is the cable i used. I think there’s a different issue at play. (see my answer for video link of HDMI port)

here is the video of the working HDMI port