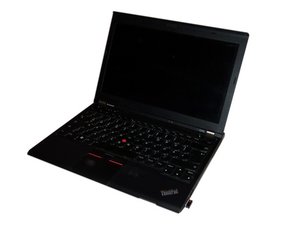 12.1" business laptop released in June 2012 by Lenovo. This laptop uses multiple product numbers, which vary based on configuration.

Power button turning off but not on

My Lenovo thinkpad x230 power button has stopped working to turn my computer on after a shutdown. I can still force start it by attaching the AC when adjusted in BIOS but clearly not ideal when there isn’t a power source available. The power button does however work to shutdown or sleep the computer once on so I don’t understand the issue.

So far I’ve tried a few methods on the internet - taking the battery out, holding the power button for 30 seconds, putting the battery back in but nothing and given that the button still works to power off it isn’t a problem with the plastic button pressing down underneath. The battery is also pretty degraded, only holding 20% of its original capacity so I don’t know if that could be the cause.

I could buy another keyboard for £30 but I’m not even sure that’s the problem so don’t want to waste money if I might as well get a whole new laptop. I’ve also been trying to remap another key to the power button but hasn’t worked. Any help would be much appreciated, thanks

Have you tried taking the battery and just use the charger?

Does the power button work now? If it works then the battery may be the problem.

When you get it working, as you mentioned in your question, do you shut it down using Windows Shutdown?

Hi Mike, thanks for the reply. I have set the BIOS to automatically turn on when the charger is attached so I cannot test to see if the power button works before it switches on! I also don't want to change this as I may not be able to power on the computer all then. I normally use the windows shutdown once on but I have tested to see that the power button still works to put it to sleep or shutdown. The battery capacity seems most likely so will order a new one and see if the problem still occurs. Thanks, Tom

There is a spring like machinal switch under it that sometimes becomes clogged with dirt or lint. If this isn’t the issue you can try flashing the BIOS as sometimes this is the issue. However if the battery is that old and degraded it may not be able to pull enough power to start the boot cycle. This tends to happen below 25% power especially if one of the cells(likely 18650’s) has become a drainer. Does the battery hold power over a couple of days without it in use and removed? A laptop or PC draws the most current at one time right as you push the power button. This may also explain why when you plug it in it works. it should work instantly when you plug it in unless you have a bad cell draining power but in this the battery should get a hot spot. Can you turn on without a battery installed?

Thank you, do you know how I can access the switch underneath to clean it? I can't find an easy way to get the keyboard apart to see if this is the issue but given that the button still works to power off and can't hold charge over a few days it seems the battery issue is more likely.

The BIOS is up to date according to Lenovo Vantage and unfortunately there are no options to set a backup power button. Currently I have set it to power on when the charger is attached so I can't test to see if the power button works to power on when the charger is attached. I also don't want to change this in case the computer doesn't power on at all but it seems like getting a new battery would be worth it and go from there. Thanks, Tom

@tom232 you can't remap a power button as it's a motherboard feature unlike a keyboard. To get it off if I remember correctly there's a clip in piece just above the keyboard that you have to pry off to expose 2-3 screws. However it is likely the battery's fault here.

There is a teardown on ifixit just follow the search results. All the models from around that time remived about the same

The issue is persisting even with a brand new battery at full charge. I can't find a way to take the keyboard itself apart to clean it more thoroughly but from what I can see the whole thing is clogged with dust. Another strange issue is that when powered on, and I press the power button the screen changes orientation at first and then after a longer press goes to sleep. It seems like a dodgy connection in the keyboard is most likely as the battery problem is ruled out?

@tom232 yeah I figured that was probably the issue.

you may need to just replace the keyboard

Thanks for all your help. I will just try to leave it in hibernate for now to avoid the power button and if the rest of it survives I'll get a new keyboard later!