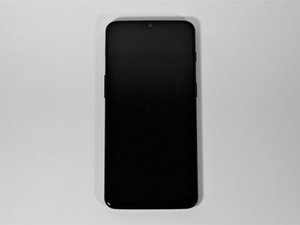 The OnePlus 6T is an Android smartphone made by OnePlus. It was announced on October 29, 2018 and released on November 6, 2018.

Battery will not charge after charge runs out.

I have a Oneplus 6T on my desk that came in for a screen replacement. A few weeks later it was noted that it would not charge after the phone died, so while it may be related to the screen replacement we’re not 100% sure.

The phone works perfectly fine as long as you don’t let it run out of charge. If it powers off on its own because the battery ran out, you’ll see the “battery too low to turn on” screen that it flashes once and that’s it. It pulls 0.47 amps off the charger according to the meter, but even leaving it in overnight doesn’t result in any change. (If the battery is unplugged it only pulls 0.17 amps.)

The only way I’ve found to get the device to turn back on is to put in a battery with some charge. Either by externally charging the old battery or putting in a brand new one. I’ve tried new batteries and replacing just about every easily removeable component on the device with no change. I’ve tried with brand new USB cables, multiple AC adapters, hooking it up to a PC, pressing all the power/volume combinations to no avail.

If anyone has any ideas, I’d love to hear ‘em, thanks!