main board where connector plugs in 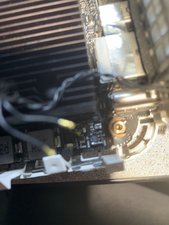 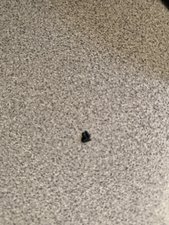 board after connector broke off. 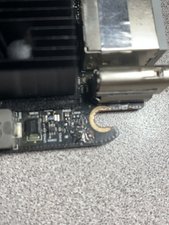 I was trying a memory and drive upgrade, 8gb and a 250gb ssd. I used the iFixit disassembly steps, but I referred to the Apple Dollar video for tips in reassembly. Plugged the new power supply, pressed the power button and … nothing, no fan and no picture. Before disassembly I at least got the beep for no memory. So I removed the memory one stick at a time. No change. Then the drive came out. No difference and it was back to the way it was before disassembly. Nothing, not even a beep. I checked that the ribbon cable in the back to see if it was seated and it was. Double checked the seating of the board going into the slot on the main board.

I know no one can direct my hands to the exact place and problem. I’m looking for the next steps to troubleshoot. What to do and what to look for. I must have missed something in the reassembly and would like your expertise in how you would work this.

The pictures might show the problem. Seems that the power on button has a connector linking it to the main board. Klutzy me must have snagged the wire in lifting the chassis out. It broke the connector and the link to turning it on.

@danj I hope this is the way to message members.

Sure I could start with another mini or buy a working one. I am looking on eBay now. But I want/need the practice of figuring this out. So how can I check each component starting with power adapter ?

Was the system working before you started altering things?

Sorry, that must have beenn in the other questiion: yes. With no drive or memory, it produced the error beep.

Reference: If your Mac beeps during startup

Then I tired just memory changing which stick

It's acting like a dead short between the power supply and first component.

I understand the systems where stripped down, that makes re-activating them harder!

You are assuming the system was working at the start and the person stripping it down was careful enough not to damage things in the process.

So I would find a a known good set of SO-DIMM’s (using a another system or buying them) As thats the first thing you need to move forward.

Next I would create a bootable USB/FireWire drive with the needed OS for the system in question OS-X Snow Leopard (10.6.x).

I would also have a set of spare PRAM batteries as any system sitting unused and is older likely has a dead battery.

As far as digging deeper without a DVM you can’t do much and even that won’t help if you need to trace out a short within a logic board without a set of schematics and boardviews which for the mini’s is as rare as a Dark Purple diamond!

Now install the proper drive for the system. This system REQUIRES a SATA II (3.0 Gb/s) drive, Most drives today are FIXED SATA III (6.0 Gb/s) and will not work in this system! A few drives offer AUTO SENSE technology so while they are designed to work in a SATA III system they have the ability to shift their data rate to match the systems I/O speed. As an example: Samsung 860 EVO SSD note the interface line it lists SATA II data rate! If the given drives spec sheet doesn’t list it its a FIXED drive at what it states.

Actually It was I that was klutzy. In lifting the chassis I must have pulled out the wires from the power supply to the main logic board. I traced it to the copper tracings. Finding those points I soldered the wires to the main board. Viola!!!

I started with the Apple }{ in 1982. It was fairly easy, the kids at school messed with off/on when things got stuck. That would be the power supply. Then when graphics acted up there was another chip I’d swap.

We added the Epson QX-10 and I had to pass the test based on schematics! I passed at least.

Moving to a Vaar, I had to learn IBM Pcs. Their manuals for troubleshooting were wonderful ! They took you step by step with a flow chart IF THEN. We got all sorts of PC compatible. Then I moved to a 60 person network, coding and hardware while maintaining the servers.

I think we stop short. Once it’s deemed dead there’s nothing to lose. To learn about the machine, do an autopsy. If you do see something out of the ordinary, try a fix, it won’t get worse.

Dan. thank you for the structure in trouble shooting. Just like multiplication tables, they have to be learned until second nature. At some point they become second nature. When this started I asked for points to be tested as it seemed not to be getting power. I tested that theory by trying to insert a cd. Finally when I got power to the main board, the CD was grabbed into the drive.

I appreciate your help and how you structured things. It’s a case study for others. It gives me hop to go back to some of my other “dead” machines.