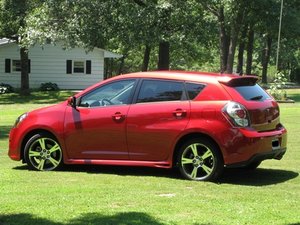 Based on the Toyota Matrix, the 2009-2010 Vibe was available in an economical base trim, an AWD mid-trim, and a sporty GT with more power and manual transmission.

check engine, traction control and avs light are on. avs is flashing

took it to a dealer, they did a diagnostic test, said it was a tune up and fuel injectors were dirty. 468 bucks later, the light came back on two days later, check engine stays on, the traction control stays on, the avs light flashes. took it back, 6 hours they ran every test could not find anything wrong with my car, told me to come get it, the lights waited another day to come back on. is there a sensor somewhere they are missing? i passed emissions in july 2019, so i am befuddled as to what the problem is. any suggestions?

I have a 2009 Vibe AWD, had the same exact dashboard light problems. I took it to a local repair shop and they sold me a #1 coil repair job. Ten months later the same problem and symptom occurred, and they sold me another #1 coil repair job. Twelve months later, dashboard lit up all over again with same symptoms. This time I took Vibe to the Dealer and they said car needed a fuel pump, kept my car for 2.5 months saying they couldn’t locate a pump for this old car (and a few times trying to sell me a new car). Then they located a fuel pump, installed it, and charged me about $950. During the 2.5 months, I did not get a loaner car. They said a new pump doesn’t fit my car and they had to locate a used part, which took that long. I had to wait and it was a winter with deep snow. Note that a car can drive with a bad fuel pump for a few days or weeks until it finally breaks down. I did drive it into the dealer ok.

It’s now been about 20 months and the dashboard hasn’t lit up. I’m aware the car is getting older, 156k on odometer, but I can’t afford replacement yet.