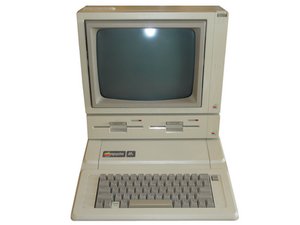 I did a system test,on the screen appeared system ok.I connected the floppy drive while machine was on and the floppy started spinning,reads the disk.

When floppy disk drive is connected to the controller card and I try to power up the system,nothing happens,not even power up light is on.Thank you in advance!

I can't say for certain, but I'm concerned about the connection of the floppy drive while the system was on . Way back when, we were always told to NEVER hook or unhook anything while the system was on, lest it fry the connecting board or components in the peripheral. Which raises the question, how did you connect the floppy drive to the machine without connecting it through t controller card?

It sounds like a microchip in the floppy drive has been fried and is shorting to ground. This makes the computer’s power supply go into safety-mode, which prevents the computer from turning on and causing further damage. You might have heard a faint clicking sound coming from it while the computer was switched on.

Michael Clark’s comment is correct. You should never plug/unplug anything into old computers with the power turned on, and this very likely was the cause of the problem you’re having. Long ago, I ruined an Apple IIGS by installing something while the power light was facing away from me and I thought the computer was turned-off. (It wasn’t)

There is a common problem that occurs when the connector for the floppy drive is plugged into the card upside-down. This causes 12 volts of power to go through things that it shouldn’t, in the wrong direction, and permanently damages the 74LS125 microchip on the drive. Replacing that chip might fix your problem.

Here’s a video for replacing the 74LS125 chip and how to plug in the drive to the controller card properly: https://www.youtube.com/watch?v=l1P0F4L5...