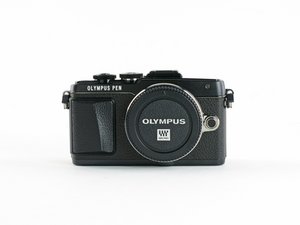 The Olympus Pen E-PL7 is the sixth camera in the Pen Lite series, released in August of 2014.

Repaired but touch screen not working

Hello all, and thanks for this great resource.

My e-pl7’s screen cracked. I ordered a replacement from aliexpress and followed the guide and it comes on now, but the touch screen doesn’t work. I have taken it apart and re-attached it several times.

During my repair, I think the ribbon ZIF connector may have been ‘truncated’ by a few pins when it was dropped, but as far as I know that’s just to secure the cable, not conduct signal. I don’t know what else could be the problem, aside from a faulty replacement part or invisible damage during the break/install. There is what looks like a grounding pin left over that @tgaines also could not find [1], but there were actually a few differences between the original and replacement part so I’m a bit lost as to how to restore the touch function.

The camera works without the touch screen, but it’s very useful for spot focus, focus tracking, and zooming, among other things.

Can you give a better description of the parts? I am not sure what you are saying about the ZIF connector being truncated, if you mean the part that locks the cable then that could be the problem unless this happened after replacement. If the ZIF lock is damaged then it may not hold the ribbon cable securely to the contacts, you can try wedging a small piece of paper folded a few times and use it to hold the ribbon cable in place in the ZIF connector. Check the ribbon cable, sometimes the connector pads delaminate.

Thanks for the reply. Here's a picture: https://photos.app.goo.gl/4cfFnLKtMRRy7B...

The grounding piece is circled in red, in an inset with the broken screen.

The ZIF connector is circled in blue. As far as I can tell, it was longer, but part of it broke off, but it's hard for me to tell.

I did the first repair some time ago and have just picked it up again. I didn't take enough pictures of the repair so don't remember how some of it goes together, and that information is also missing from the ifixit page. It appears I had to remove the 'circuit board' from the old screen and attached it to the new one, so I suppose the problem could be there. Here is the pic I have of the repair in progress (I don't know why the new screen had that dirty mirror effect, but that's how it arrived) https://photos.app.goo.gl/jYb8DLwaB7sAvL...

Generally there are two connectors, one for the video and the other for touch. Check the original screen and compare it to the replacement, the touch digitizer is on the front.