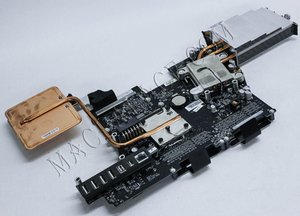 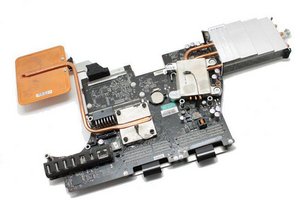 Searching in ebay, found that the C2D boards are very expensive, a i3 logic board for a mid 2010 A1311 part number 820-2784-A is pretty similar in shape, screw location and connectors, the angle of the power cable connector is different, everything else looks the same. 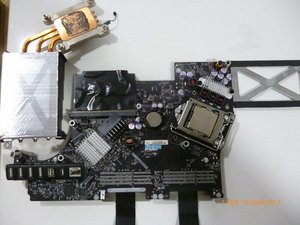 Anyone had tried a logic board swap? I know that have to buy a new CPU and probably a GPU, but the cost is about the same buying only the C2D logic board or the i3 logic board + i3-550 cpu.

The GPU is other issue, because I don't know how the integrated graphics works in the i3-550, but I have a spare HD2600 PRO that I can use if necessary.

Is it possible? or maybe I'm complicating too much and should just sell the iMac as parts?

I'm in the process of make this Frankenstein's iMac, and I already can hear the villagers with torches and forks coming here, but had to made it in name of apple science, I got a working 820-2784-A logic board from a fresh deceased 2011 iMac (I don't know where it comes, I don't wanna ask) with IR receiver, wifi/bluetooth module, videocard, and CPU with booth coolers for the same cost of the 820-2494-A C2D motherboard, I was really, really lucky. Phisically the logic board fits in the aluminium housing with no problem.

The cables for accesories and connectors is another thing. This is the list of connectors that are different or have no place to plug in:

*CPU fan connector is different, you need the fan 610-0094 with temp sensor

I found someone selling his 2010 iMac for pieces, so I'll try to get all that parts for cheap in one place, if I can sell the pieces that I don't need, the transplants for the Frankenstein's iMac could be free...

Was replacing all cables really necessary?

Eze, yes it worked, and all those new cables are needed, because many of the existing cable connectors are not compatible with the new otherboard.

I recommend you to do as I, look for many reference images of the motherboard compatible with the CPU you want to install and compare the connections with the existing connections on your motherboard, so you will see which cables can be re-used and which cables you should change, if you choose the same motherboard than me, then most of the research work is already done.

I was making a research for the screen and the screen for that logicboard is 12v :( and the original is 5v, so there is a problem :(

Thanks for taking the time for posting such an elaborate answer !

2010 video card pressure wall PN: 922-9483 (this is a plastic piece that attaches to the logic board and helps ensure air cycles to the GPU cooler fins)

I was able to get all the parts listed above for $114. This listing and price doesn’t include the GPU as I already had that. The logic board I got came with 4GB of RAM, otherwise you may have to account for that. I’ve upped it to 16GB. It also does not account for the i5-680 CPU chipset, which I found for ~$40. You can also use the i7-860S chipset if desired, the actual 2010 iMac I have I used that for and found it for ~$75. There is also a i7-870S chipset that works, but is rare so the price is much higher.

As discussed by the previous contributor, I tried swapping the connector on my existing LCD screen (PN: 922-9497). However the display did not work. I had to get a 2010 LCD screen PN: 805-9684 and the backlight inverter PN: 612-0073, which was needed as it has a different connector to the LCD screen. This added $97 to my cost. I may just not have had luck like the previous contributor in getting it to work.

Once converted, your ‘About This Mac’ information will change to match the new logic board. Here’s what my 2009 iMac shows now: 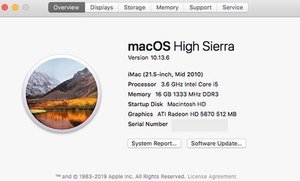 Here’s some benchmark scores from my modding as well:

An advantage of the i7 chipset is that you can take advantage of 32GB RAM as well! Here’s the ‘About This Mac’ for our actual 2010 iMac with those mods: 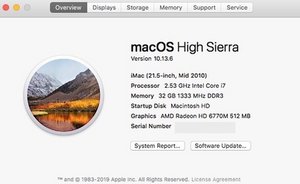 As far as I can tell, the 2010 uses those two temp sensors, which provides a good delta of air temp coming in and going out.

Ok thanks, As of now Im trying to source the parts for my conversion. How is your upgraded model running so far?