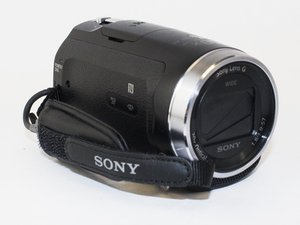 This is about a Handycam HDR-SR10 but should be applicable to most current Sony Handycams.

I got this used from a skateboarder and it appears to have taken a few spills. When I got it the LCD cover was wiggly but everything worked fine for a while. Then the LCD started going intermittent and finally died.

I ordered a replacement cable which I installed. The LCD now "works" in that the touch screen is responsive and there is an image but no backlight.

1) the image in the LCD is upside down and;

2) there is no brightness to the image - i.e. I can only read the screen by shining a bright light on it - so I assume the "backlight" isn't working.

EDIT - I'm thinking I broke the micro-switch on the other LCD cable that tells the camera the screen orientation. I ordered a replacement which should resolve the upside down image issue.

As for the lack of backlight, I used a meter to test the circuit and there is the appropriate 2.5V coming into the LCD from the camera for backlight power. This tells me the power is present it's just not being turned on.

If this is the case then the replacement switch/cable should fix my problems.

If not, I'm still in need of pointers thanks.