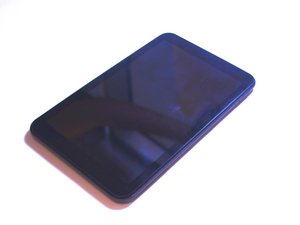 A tablet released by Hisense in 2014, identified by model number E2281.

Frozen Home Screen and nothing will move it

When I switch my tablet on, the screen showing "Hisense Powered by Android" comes up fine but it will not move/do anything from then on. It is completely frozen.

I have let it completely discharge the battery and recharged it again but it is still the same.

When I switch it off it won't stay switched off but after about 5 secs comes on again of its own accord.

Admittedly I haven't used it for around 6 months (it has just sat in a drawer) but it was working perfectly previously.

Anyone have any ideas to get it going again?