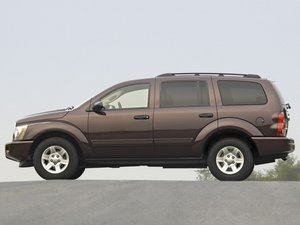 The second-generation Durango was first shown as a concept dubbed Dodge Durango R/T concept at the 2003 Detroit Auto Show.

This has happened to my truck previously but it would only last a few days then go away. I was told its caused by an electrical short, not the actual transmission in the past. Last time this happened was over a year ago but this time is worse and lasting way longer than normal. ...

It started when i was driving a few weeks ago and noticed my truck shifting a bit hard. Then, the rpms would start fluctuating even though I wasnt giving it anymore or less gas. Anyways, then it wouldn't shift past second gear and then after a few minutes first gear (plus if it tried to shift, it seemed to be going into neutral instead of the next gear.). While the truck is acting up like that, if it's in park it idles REALLY HIGH and is so loud which isn't at all normal. It did this for about 2 weeks or so then suddenly it was fine. Seemed to be running great. No problem shifting and idling way better (although I did notice the idle was a little slow but that was it). Ran great for about a week and now it's right back to square one again. Not shifting, idling super high, all that fun stuff.

Now the thing I've noticed is that almost every time this has happened its either raining or was raining earlier in the day so there's still puddles on the ground.

Has anyone had similar problems to this? Is there anything I might be able to do at least temporarily to get it to run well enough to at least get it to the garage 40 minutes away? ?? Any advice or previous experiences shared would be greatly appreciated!