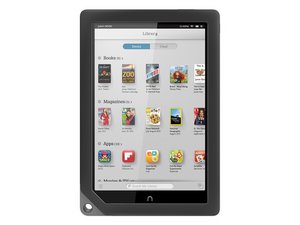 Repair and troubleshooting information for the Barnes & Noble Nook HD+, a 9" screen e-reader and tablet released in November 2012.

Who knows what is wrong with my nook tablet?

i have a nook, i plan on replacing it soon because its just having so many issues and barnes and noble wont help or replace it.

it started lagging, some apps stopped working properly or completely, the screen rotation started acting up, it started crashing at random, the screen would become unresponsive, now the screen and tablet itself is starting to get flat out corrupted. apps, the homescreen, the settings can all crash at random and get massively corrupted until i restart the tablet or wait a while.

it now wont turn off properly, turn on properly (sometimes) and it's charger light is making a constant flash between orange and green and wont charge.

i checked its status and it says that its way colder than it really is, its status is either corrupted (random text like "dhigufdh454" or "unknown") and it says its health is in overheat. overheating when it says its 40 degrees F.

welp, what should i do?

(its also having issues with bluetooth and wifi)

EDIT: i got it charging, i had to heat it up, it turns out when its cold it overheats, but still, incorrect for the nook.

the on screen keyboard also doesnt work sometimes, like it doesnt pop up when it needs to.