I changed the back housing for the iPad 4

Hello. I changed the back housing for iPad 4 Wifi version. But I accidentally I poked the long Volume Headphone Audio Headset Jack cable. And now the iPad is dead! Is it really because I poked this cable exactly ? Could it be ?! I mean I did every thing in order as the video told me ! Could the logic board be dead for that mentioned cable is little damaged ?

You don't know how grateful you're here for help -Minho, Thanks. I actually disassembled and reassembled my Apple iPad 4 Wifi version and put it in a new back housing cover because the old cover was damaged by the edges in it. So I dis-attached the adhesives with a heating gun on 200 degree Celsius for few seconds to take battery and other glued cables off. 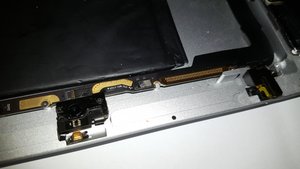 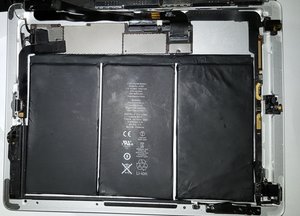 I also looked back at the old housing cover or box. I noticed that I cut the cable that connected to the head phone jack. can you please advise me about what cable I will buy next. (other than the headphone jack)

I added the last picture. here

IT'S DOWN THE CAMERA and I don't think that this is the same headphone jack cable. So which one is this please ? 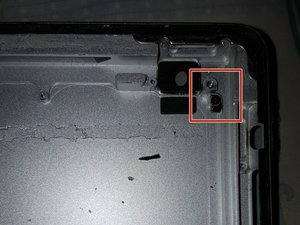 Do you mean this?

What exactly do you mean by "poked"?

These flex cables have a high density of copper traces running through them. If you poked or damaged it, you could cut an important trace or short a voltage rail to ground. The good news is you can order a new one and replace it.

Thanks Walter. I sure hope so it could be this cable who's making all this difficulty for the iPad not starting up. Hopefully not the logic board. I'm sure I did nothing wrong. Could it be the battery got damages because of the heat when I was taking it out ? Does it usually happen like this >?

You never mentioned heat before...how much heat and what did you use?

You obviously did something wrong otherwise your iPad would be working. There's no shame in that, iPads are much more difficult to repair than iPhones. Can you post pictures (update your question) of the headphone flex (poke) so that we can see it's condition?

All it takes is one trace to be damaged and you can have all kinds of unpredictable problems. I don't know for certain if a trace is situated in that area but I would replace the headphone jack board just the same. As far as the heat, if it was limited to a few seconds, it shouldn't be a problem.

It just likes like another fragment of the Headphone Jack board. Changing the board should solve your problem.

As a side note, when you update your question, I don't get a notification. So if you want me (or anyone) to notice the update, you should put a brief "look at my update" comment on my answer so that I receive a notification or you can directly address someone with their @ (@refectio for example). I caught this one by chance.

Thanks for your help, Sorry I didn't know about that notification thing. I will be careful next time. :)