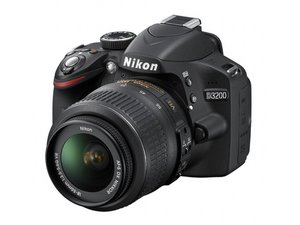 Nikon's D3200 DSLR has 24.2 megapixels. This model is geared towards casual photography enthusiasts with advanced specifications and performance.

Metering malfuntion detected on my D3200

I have recently returned home from my holiday but while I was unpacking my case on the ARRIVAL to my holiday destination, I switched on my D3200 camera and received a message on the display screen saying..."Metering Malfunction detected, contact a Nikon authorized service rep"?.....Anyone any ideas how I can resolve this?

Hi Sarah, I've not had any feedback yet but my next step is to take my camera to a Nikon service rep and see what they say...I will keep you informed... X

Fixed. It cost $US260 though (even under warranty). But, they messed up other things in the process. I only use it in manual mode. It is a mess. I can't afford to send it back. I have a second one that works fine though. However, next time I look to buy a camera, I'll look at Canon first. Nikon service could be SO much better. My camera is my job!

I had the same problem on my Nikon D3200 after I dropped it to the ground on a very hard floor. The camera was dropped in such a way that the attached prime lens took most of the impact (lens cover came off to dampen the impact a little).

I was in Dunhuang city in China on the old silk road. Being slightly panicked, together with my chinese speaking friend I found a generic camera repair guy in small electronics department store. It took about an hour but he fixed it.

Instead of replacing any part, he re-aligned the optical metering channel on the lens mount of the camera body. Turns out the drop affected this part in such a way that it was not aligned anymore. I can't give any more details because I couldn't find any schematics online on how exactly the metering system works.

It took him some time to narrow down the issue by disassembling most components of the body. I don't know exactly how he re-aligned it - he even called a friend of his in who works on Nikon repair in Germany to get a second oppionion. At the end I saw him strongly handling parts of the lens mount back and forth until it was re-aligned.

Overall great experience. The whole thing just cost 400 RMB (about 50€) for his time because he didn't have to replace any more. Now, about 3 weeks later the camera is still working just as-new even though I didn't stop giving it my usual "use it and abuse it" treatment. (No, I didn't drop it again.) 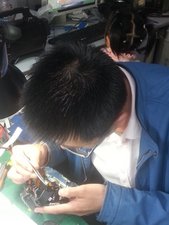 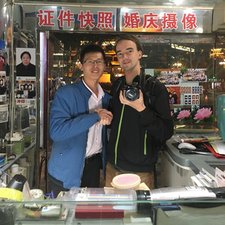 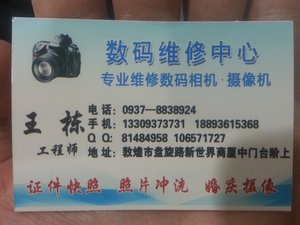 I'm very thankful to this guy because he totally safed my photographic life on this trip. It's great there are still people outside who can repair instead of replace, even if you have to go to an old desert city in western China. Official Nikon repair centers could take a hint from this story. The "Metering Error" after drop damage seems to be an often repeated fault line on Nikon bodies that apparantly can be fixed (at least in my case) with some fine tools and lots of patience. I'm not saying it is easy nor that my case applies to all other cases but there you go.

You may want to share this story with your Nikon sales rep or repair centers next time they give you a $260 quotation.

Have fun and keep fixing stuff!

i noted the pix of the service guy working on yours. i scrutinized my d3200 prism area and found obvious problems. see my comment below.

I am having the same problem with a D5300. Did you find out anything?

Today I took my camera (D3200) to a Nikon service shop and have been quoted a price of £120 + vat to get my camera fixed... A circuit board is not communicating with the rest of the camera...I hope this helps??

Thank you for letting me know! I was afraid it would come to that. Oh, well .... In any event, thanks for posting back.

hi, after giving your camera to the service center, is it fixed?

I am having the same problem with a D5300. What did you find out? Sarah123ed at gmail dot com

my camera also has had a 'sudden deceleration event'. close inspection revealed the camera hit on the left side against either concrete or some surface with enough force to leave 'sand particle' indentations in the plastic. everything works in manual mode, but no other mode is allowed to work as the message 'metering error...please contact your expensive nikon authorized rep...." comes up. it seems the alignment of the focus detector module has been altered sufficiently enough to cause this. a rip down will reveal some further reports. stay tuned....

My case seems to be the same. I have a Nikon D5200 and it shows the same metering error message after I dropped it. It only works in totally manual mode, without having any information about the exposure before the shot.

I think I am not willing to spend about €250 on fixing it, so I really appreciate your help or information. As soon as I get any additional information or a make the decision to fix it by myself, I will also share the photos and the information with you.

I am afraid this could take me about three months, since I quite busy with my work now, but please let's stay tuned.

"noticed a slight indication of prism damage in the viewfinder, focus point circles are not centered around the little led spots too. also, what appears to be a delamination between two surfaces in the prism assembly. this could futz up the metering for sure, and any integrated self diagnostics would find that. this is what an extreme G force from a solid drop might do, break it! not sure if i'll go further with this, manual operation is actually quite nice, cant risk losing what capability i have, i and love that 24mp sensor too!"

Hi, I recently made a video about this issue. Hope it helps!

this video probably explains it best. I want to attempt to open it too but can't open all the screw.. Maybe a better idea is to bring it to a camera repair shop where they have the tools and expertise to open your fragile (and broken) camera

There is a now youtube video on how to fix this. You do need a tiny screwdriver and need to take the back off. There are several ribbon cables and one of them is for the metering. All the ribbon cable sockets have a tiny bar that you need to gently lift up, seat the cable end properly then push the bar back down. When the camera falls the jarring causes the bar of the metering cable to come unlatched and the ribbon cable comes loose. I didn't think of it at the time, but a tiny bit of electrical tape would help to hold it down. Anyway my D3200 is fixed. Yeah ! https://www.youtube.com/watch?v=uk9f5kXJ...