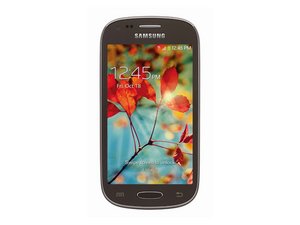 The Samsung Galaxy Light is an Android device released in October 2013 for T-Mobile with GPS, microSD card slot, and 8 GB memory.

Out of memory, phone will not turn on

My phone had shown a low storage warning for about a week or two and today I had removed the battery and attempted to turn the phone on again because it was glitching. However, when I tried to turn it back on, it became stuck on the screen reading "T-Mobile 4G LTE", right after the Samsung logo screen. I removed the battery again and the same problem arose.

I figured that the phone was not working because it had no more space left, so I tried plugging it into my PC to try deleting some items through there. The PC notified me that "The last USB device I connected to this computer malfunctioned, and Windows does not recognize it." I tried connecting again and it still did not recognize my device.

I tried putting it into safe mode, but this was unsuccessful.

When I plug it in to charge, the battery image shows up and it charges fine, but it still does not turn on.

I do not want to lose all of my important files and photos, and I would like to avoid going to a technician if possible. I have no other Samsung devices. Is there a way to enable my phone to start up again, or at least register on my PC? If there are no solutions to the above, is there a way to retrieve my photos and other files?